The Wrong Mother, by Sophie Hannah

I've been hearing about Sophie Hannah from a couple of different directions lately--first, hot ticket novelist Tana French has mentioned recently that she is on French's own shortlist, and secondly, Martin Edwards has written a good piece on her over on his blog, Do You Write Under Your Own Name?. Then Penguin was kind enough to send me an unsolicited copy of The Wrong Mother and I was off and running.

I am not going to delve into the twists and turns of this complex and very absorbing crime novel, other than to say that it starts off in the voice of a mother of young children who has an upsetting encounter with her child minder, and not too long after, finds herself pushed into the path of a bus, apparently deliberately. What I will say is that it is no accident that the novel starts off with a dilemma about childcare, career and the mothering of young children. There is not just one mother facing this situation of trying to be a good mother and still holding on to an interesting career despite the demands, there are several.

In fact, you might say that The Wrong Mother is an exercise in refracting the same basic situation through several different lenses. The care of self versus the love of one's children plays out in various ways. One question that I was left with was more general, though. When we complain about the people and situations in our lives, how seriously do we mean this and how seriously do we expect others to take us?

Although ultimately I found some of the resolution of this story a little unsatisfying, it does fit within the conventions of crime fiction, and I have to say that I was reading compulsively all the way through and the main puzzle of the story was not one I saw through till quite close to the end. I'm eager to read more of Hannah's work, and though I think mothers with small children would find much to relate to here, I am not sure they could read this book with equanimity.
Posted by seana graham at 5:50 PM 6 comments: Links to this post

I must admit a weakness for novels that use London as a strong and evocative setting. Vikram Seth's An Equal Music springs to mind as do several of the mysteries of P.D. James, maybe particularly Original Sin with it's venerable London publishing house set right on the Thames. I recall reading her early novel, Innocent Blood, before I ever visited the city, and I do know that a young woman being able to find a flat in London seemed one of the most glamorous things in the world--and this before I had the faintest idea of London prices.

William Boyd's Ordinary Thunderstorms joins the ranks of those crime novels that use both London and the Thames to great effect. Here's the opening:

Let us start with the river--all things begin with the river, and we shall probably end there, no doubt--but let's wait and see how we go. Soon, in a minute or two, a young man will come and stand by the river's edge, here at Chelsea Bridge, in London.

And of course that was enough to hook me right in. I will not give away whether things do or do not end at the river, but the river is very much a part of the landscape through much of the book. It reveals itself in different aspects to different people, reflecting their inner lives as well as outer weather.

A chance encounter leads our hero, Adam Kindred, to become deeply implicated in a crime. His own decisions in response to this lead him further afield, until he finds himself looking at London from the lower strata, a view of the city that few tourists get to see. Meanwhile, there are some pretty major corporate shenanigans going on, and of course someone who's been sent to clean up untidy loose ends like, say, witnesses. Although at times this seems fairly standard stuff, the pacing keeps it lively.

What I find more interesting, and what I think most readers will, is not just the way Adam hides out in a vast and in many ways impersonal city, but the way in which he comes to accept that riding the river of chance, and being able to let go of the old life as necessary, is really all we have. There's a clever, ironic twist when another character has to make the same decision, but I'll leave that to you to find.

As it turns out, there are more than a few people in this book hiding from what they once were. But, as is pointed out in the novel, 600 people are reported missing in Britain every week. That a few of their fictional counterparts find their way between these pages does not in the end seem too improbable.
Posted by seana graham at 2:03 PM 3 comments: Links to this post

The Parkour and Freerunning Handbook, by Dan Edwardes 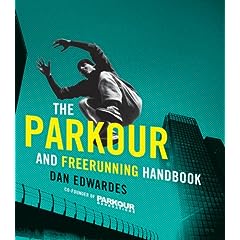 Every once in awhile, this blog must be forgiven if it takes a break from writing up books of a high literary character and indulges in its author's odd private obsessions. This post is one of them.

What are parkour and freerunning? Well, fans of the recent film Casino Royale are probably already familiar with the opening sequence that made this gymnastic way of moving through the urban landscape famous. For those who haven't seen the film, you can think of this as a whole new way of getting around and relating to your city or town.

Okay--I am not really the ideal candidate to practice this discipline. I don't think I'll be doing backflips off three story buildings any time soon, for instance. But of course the primal place for all of us is always our imagination, and whether we can practice this in the urban landscape itself, or only in the far frontiers of our imaginations, this stuff is really cool. It's a shift in our thinking about city streets, city railings and city buildings to imagine owning these impersonal public structures with our personal stunts and feats. If you're young and athletic, you may be able to duplicate some of the moves demonstrated in this book. But even if you're not, and I believe this is actually the important part, you too can imagine the streets you live on in an entirely new way. Take a look at this book, or the movie Casino Royale for that matter, and try to picture yourself doing such stunts on the streets where you live. You will inhabit your own space on earth in an entirely new way if you do.
Posted by seana graham at 9:26 PM 6 comments: Links to this post