Rogue Male, by Geoffrey Household: on the value of imprints 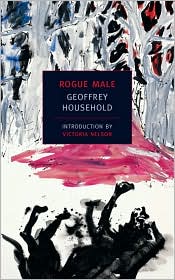 At Bookshop Santa Cruz, where I work, we not only sell new books but used ones. Eventually, and inevitably, some books of both these categories end up discounted further, and are called Sidewalk Sale books. We haven't done an actual sidewalk sale for many a year, but occasionally we pull these
books away from their spot by the window and feature them a bit more prominently. You'd think that these would be the most sorry rejects in the store, but the truth is, many of the real gems are hidden there, and if I could only read books I found among these for the rest of my life, I would probably still die quite happy.

Geoffrey Household's Rogue Male is such a book. I'd heard of Household before, but never been tempted to pick up his work before. And with such a title, I certainly wouldn't have rescued this book from the bargain bin, even at a reduced price. Why did I? Because it was published under the imprint of the New York Review Books. Because I saw that it had one of their distinctive covers, I didn't reject it out of hand, but picked it up. And once I started reading--well, you know how it goes with good books.  You end up getting hooked.


Not that the cover illustration itself is a sure seller. It pictures what looks to me like a very frazzled and probably dead animal.  What an imprint says to someone like me is that a publishing house or a small wing of a publishing house that I respect has decided that this volume is worth backing. In the case of the NYRB books, these are often if not always reprints of work that has slid into some degree of obscurity. They may have had their heyday, they may not. Over on their webpage, they even have a slot where you can suggest an out-of-print title for them to think about republishing.

Rogue Male is a classic cat and mouse tale, with the also classic twist that the hunter soon becomes the hunted. The unnamed protagonist is a professional hunter who has decided on a kind of whim to see if he can  break through the defenses of a dictator and get close enough to shoot. He is not actually going to shoot the man, of course, just see if he can do it. He comes within a hair's breadth of success, but a miss is as good as a mile in this case. Tortured and then left for dead, the hero of the tale manages to escape and begin a thrilling journey across all kinds of terrain. It turns out to be a bit more complicated than that, but that's enough to set you off with. I will just add that there was one point in the story in which I had to break off and go to work, and I actually felt quite uncomfortable leaving the narrator in the predictament he had found himself in.

Victoria wrote what I found to be a very helpful introduction to the book (which I read afterwards), giving me a bit more context for the yarn Household spun. In particular, she explains what Household meant by 'Class X' in the novel. It had a sort of snobbish possibility in it that I was wary of, but in fact, I did Household a disservice. In his own life, Household was quite a traveler and one night shared dinner in a restaurant in Toledo with a Spaniard of limited means. After he left, Household got up to pay his bill, and found that the man had paid it for him ahead of him. This kind of gesture went a long way with him, and embodied the qualities of the Class X type of person far more than any outward credentials.

There is a moment or two in this tale that are definitely not for the squeamish, but if you're willing to entrust yourself to a writer from Class X  and if you're looking for a vivid and gripping read, this is the one for you.