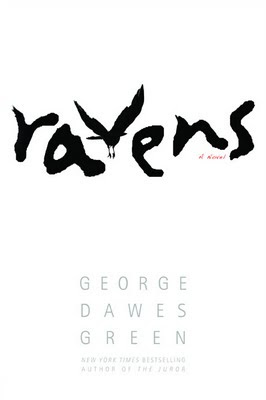 It took me awhile to track down the title of the classic suspense film that this book got me thinking about, but I finally did. I saw The Desperate Hours more than once on television when I was a kid, and it freaked me out every time. A movie that talks about a suburban family being held hostage in their home in the quiet suburbs is going to have a special existential relevance for a kid growing up in a house in the, well, quiet suburbs. I'm kind of surprised my parents let me watch this, as I apparently wasn't even old enough to recognize Humphrey Bogart as one of the convicts.

George Dawes Green's recent suspense novel Ravens is perhaps more closely related to any number of home invasion movies since then. But I wouldn't know about that, as I still don't gravitate toward movies about hostage families to this day. However,Ravens sucked me right in.

Green's twist on what has now become almost a thriller sub-genre is decidedly his own, though. The villains of this tale, Shaw and Romeo, aren't convicts, but from the start you feel that it's only luck that's kept them out of trouble so far. As they head south on a Florida vacation, an opportunity to change all that is looming up before them.

"Winning the lottery" is usually trumpeted as a piece of great fortune, even though we've all read stories of how the lucky winners have frittered it all away, lost friends, or made false ones due to their changed circumstances. We don't usually think about how that very trumpeting makes them targets, though. And let's just say that after reading Ravens, you will never quite look at Facebook in the same way.

One difference I find between the "Desperate Hours" scenario and that of Ravens is that the Boatwrights are far from the generic, innocents of that 1950s setup. There's plenty of strife in this family before their ill-timed visitors ever cross the over the Georgia state line, and let's just say that winning the lottery was never destined to solve all their problems in the best of circumstances.

The dynamic between the hostage-takers--the charismatic Shaw and the baffled Romeo-- is in some ways the most interesting part of the book. Why does Romeo go along with Shaw in his scheme? Why do any of us ever "just go along" with the plans of those who, bitter experience has shown us, make poorer choices than we ourselves do? And what will happen to Tara, the daughter of the family and the most resourceful of them, who is also drawn by Shaw's charisma (and then some)?

The premise is, of course, in some ways far-fetched. It's not that simple holding a family hostage, especially when you are hiding the fact that you are holding them hostage. The Boatwrights are free to come and go, but psychologically, Shaw keeps everyone on one sort of leash or other. In fact, figuring out how to get others to comply may be as much why he's in it as the money.

It's certainly one of the reasons even someone generally averse to this kind of suspense--like me--is willing to go along for the ride.
Posted by seana graham at 3:16 PM 2 comments:

As I began this fourteenth tale of the adventures of Stephanie Plum, inadvertent New Jersey bounty hunter, I wondered a little at my own perseverance through a series that is in some ways all too predictable. But then I realized that the element of predictability in a Stephanie Plum novel is not a fault but one of its charms.

Evanovich sets up what might be called an eternal situation--The Burg, Lula, Ranger vs. Morelli, Grandma Mazur, and so on. Out of this stock context, she elaborates new themes. In this one, we've got griefers, we've got an aging celebrity, we've got a psychic stalker, and we've got a kid who goes by the name of Zook and who really likes to advertise himself.

I don't mean to write a dissertation on what Evanovich does, but I did really pay attention this time rather than just speeding on through, easy though it would have been to do so, because I wondered why her novels continue to jump to the top of my reading pile. Isn't it basically the same story told over and over again?

Yes, in some ways it is, and frankly I do get tired of some of the shtick. Ranger or Morelli--who cares? But Evanovich seems infinitely capable of finding comedy in every new thing that comes along, and if you read individual sentences instead just being swept along in the easy flow of the thing, you will be impressed by her comic perception of life, as well as the way she makes dialogue a servant of her humor.

Comedy looks easy, it almost has to to succeed, but it's not. There are not many people who could have gotten fifteen books worth of humor out of Trenton, New Jersey. (Yeah, there's one I haven't gotten to yet, close reader.)It seems obvious now that Trenton was rife with material. Let's just say that it didn't seem so much so before Evanovich came along. One of the most touching tributes that I ever read about Evanovich was when some on-line friends, I think visiting from another country, shared with wonder their glimpses of Trenton. This is not a conversation you would likely have heard before the advent of Stephanie Plum. Let's hope she's around for a long time to come.
Posted by seana graham at 9:12 PM 6 comments:

In a basement apartment in Reykjavik, an elderly man is found dead. He didn't die in his sleep, and it quickly becomes apparent that he was not nearly as good a person as he might have been. A cryptic note has been left with his body. For quite awhile, we only know that this short note ends with the word 'him'.

The detective in charge, Erlendur, is as mystified by this as we are. Of course, he's got other problems. He's got chest pains that he's not dealing with, and a drug-addicted daughter who shows up at his door. And you wouldn't be wrong to say that he has "anger management" issues, either.

In some ways, Indridason fits very neatly into the incredibly strong wave of Scandinavian writers who've crossed the Atlantic in translation these last few years. The writing is good, the detective is, shall we say, "gloomy", and the plotting very solid. But there are aspects of this story, and indeed of the mystery plot itself that have a definitely Icelandic tincture. I like a mystery that could only be set in one place and nowhere else. It adds to the air of inevitability.

This book was written before Iceland's economic meltdown. I read during that golden era that Reykjavik was supposed to be one of the most desirable cities in the world to live in. (I remember this because it came as something of a surprise.) Indridason didn't paint the city or the country in such glowing terms even then. I can't wait to see what fictional capital he'll make out of the current much more downbeat situation.
Posted by seana graham at 11:04 PM 12 comments: