The Book of Ebenezer Le Page, by G. B. Edwards 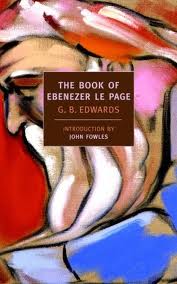 I've been thinking about this book for awhile now, without quite finding the time or the way to commit my thoughts to print. This was yet another of the books I read for the New York Review of Books book group over on GoodReads. We were enticed into reading it by the video down at the end.

Ebenezer Le Page is the longest book we've read for this group and it perhaps bogged us down a little. I don't think I was entirely prepared for its style by the video, although I understand the video better after reading the book. The book of the title is basically the book that the eponymous character decides to write at the end of his life--a kind of reckoning or accounting. Le Page lives on the isle of Guernsey for his entire life, with perhaps the exception of a trip to neighboring Jersey. Or maybe the Jersey team comes to Guernsey--I can't remember. Guernsey's position in being closer to the French coastline but a British Crown dependency gives it a complicated history and complex population for such a small place. It was also occupied by Germany during World War II, which caused other divisions and allegiances.

I was expecting this to be full of a lot of colorful island lore, and I didn't quite find that to be the case. As I found myself constantly thinking, the tale of Ebenezer's life on Guernsey reminded me of nothing so much as of the stories my dad used to tell us about his life in a small farming community in northern Illinois. There is an intense preoccupation with local concerns, and the same sense of small local events being stored up in memory for a lifetime. It's interesting, because in fact, it's not as insular a community as it might sound (nor was my dad's). People do take off for North America--mostly Canada, if I remember right, and of course the two great wars of the last century impact the story in all kinds of ways.

Early on, Ebenezer falls for a girl who is either very right for him, or very wrong, and without giving too much away, let's just say it doesn't work out. Although several people reading this in our group thought that Ebenezer's friendship with Jim Mahy had more than a little of the homoerotic to it, it's indisputable that Ebenezer spent a lot of time inviting the lasses to lie down with him under the bushes. What I found interesting was that Ebenezer himself considers Liza Queripel "the one", and he abandons hope of having her very early on. One of the things I found most intriguing about the book was to see how Ebenezer lives a life without hope for about forty or fifty years longer.

This book crept up on me a bit. I never found it hard to read or a slog, but I didn't find it to be quite as dynamic as I expected either. There is no true suspense in it, as the narrator gives away much of the story as he goes along. But suspense isn't everything. In the end, I've come to feel that it is a wisdom book, a "how are we to live" sort of book. Perhaps it is a book geared for the middle-aged more than the young, because in a way it addresses how to live once youth's hopes and illusions have faded. It is mysteriously "like life" in the way it conveys how life goes on with its own mysteries, rewards and consolations despite our disappointments in it. The ending is actually quite beautiful in its picture of how one man transcends his own individual life and marvels at the whole.

If  you are willing to take this book on its own terms, without preconception, then I highly recommend it.

The Jungle Book, by Rudyard Kipling

We read this last month for my reading group, partly because it plays a role in Téa Obreht's The Tiger's Wife, which everyone but me read the month before, and partly because at least one member had such fond childhood memories of it.
I didn't have a lot of time for the book so I only reread the Mowgli stories at the beginning. I have a fairly vivid memory of reading it as well as "Rikki Tike Tavvi" and to a lesser extent, "The Harbor Seal". It turned out that our various collections had a lot of non-overlap. Mine had some stories I don't remember, and others had a later tale of Mowgli, I think involving a wife.

I wouldn't necessarily have written about this here, but a couple of things seem worth mentioning. One is that I was struck by how Kipling turned the Law of the Jungle on its head. The real law of the jungle, I think is a Darwinian eat or be eaten kind of thing. But Kipling, being British, turns this into an actual code of law, with a tribal counsel and treaties and everything.  Far from the dog eat dog world which we think of in relation to it, Kipling even managed a little poem:

It's still true to the theory of evolution, but I think the communal aspect is a significant twist. 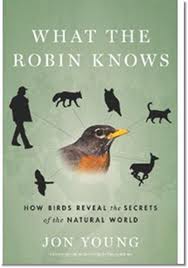 Tonight after work I went and heard Jon Young speak about his book What the Robin Knows: How Birds Reveal the Secrets of the Natural World at a little discussion group I go to. I was quite surprised to hear him speak about Kipling and how wonderfully he wrote about natural society. He even mentioned the Law of the Jungle, but he said it was really more the etiquette of the jungle. He told a great story of a herd of elephants in Africa. The leader almost stumbled upon a nesting bird of some sort or other, and she literally backed up, backing up the elephant behind her and so on, so that they then could all go around. I guess the etiquette of the jungle is that when you can give another creature space, you do.
Posted by seana graham at 8:21 PM No comments:

Apologies for not getting more posts up here recently. I'm reading but not finding the time to write up what I've read. But to accentuate the positive in my laxness, I thought I'd put up this great podcast link to some readings the BBC did for Bloomsday. You can download them for free, but you better hurry, because there is only a week or so left to do so.

If you've always thought Ulysses was inaccessible, listen to the one set at Barney Kiernan's pub, which is the one we listened to on the 16th, and you may think again.

Find them HERE.
Posted by seana graham at 8:31 PM No comments:

Sure, I have things to write about--I just don't have time to write them. Meanwhile, it's Novella Month over at Emerging Writers Network, and here is a great list of novellas to read, posted by Kyle Minor.

Man, have I got some reading to do...
Posted by seana graham at 8:19 PM No comments: