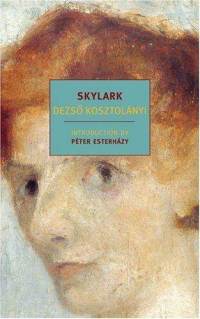 This is another book I've chanced upon because I've been part of the NYRB book club over on Good Reads. It's really a quiet gem of a book, short and in some ways simple. We've been having quite a good discussion of it over there if you want to take a look--although you might have to join the group to see it. I'm not really sure how that part works.

The story begins in a moment of nervous anticipation. Skylark,  the daughter of two aging parents, is leaving for a week in the country with relatives. The threesome has never really been apart before. Skylark, despite the lighthearted quality of her name is the unmarriagable spinster daughter in a provincial outpost of the Austro-Hungarian empire. Though the novel was written many years later, after WWI had come and gone, the year is 1899 in the story--a year when it must have appeared that things would always be as they had been before. For me, part of the sadness of the book is that the characters do not know that in a few years time, extraordinary changes will have found there way even to sleepy Sárszeg. But the author certainly does, which made us wonder a bit why he had chosen this moment and represented it in some ways as eternal. More than one commenter in the discussion found there was a fairytale quality to the story.

Although this did not strike me as a purely satiric book, it is possible to read it as dark humor. In fact the author does signal this in some ways, because not only is Skylark one of the least aptly named people in the world--the parents apparently still call her that from a time when she would still sing--but she is not even the main character of the story. Most of the time she is offstage. This is not to say that she is an incidental character--she is in some ways the prime mover of the tale. Or maybe more accurately, the prime non-mover.

Once she is gone, the parents are left, very reluctantly, to their own devices. By stages, they rediscover and in turn show us this little town, which despite its provincial quality turns out to be quite a lively little place. I think this fits in with a realization that the journalist Miklós Ijas (who is surely a stand in for Kosztolányi himself, also a journalist) has at one point. He is one of those brilliant youths who is always longing to get away to the capital, as perhaps rightly, they should. He has a different destiny. But in becoming aware of the poignancy of the plight of this little family, whose members both love and are trapped by each other, he gains a deeper insight into the common bonds of humanity he shares with them. I had wondered how Kosztolányi, a famous and brilliant Hungarian literary figure, could write so penetratingly of people who shared none of these traits. A moment of similar empathy in  his own life probably lies behind this beautiful little novel.
Posted by seana graham at 2:14 PM No comments: 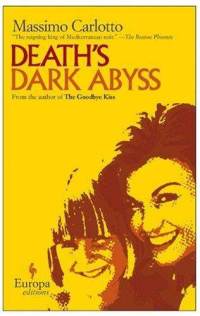 We often think of noir in terms of the American literary scene, but I'm not sure if anyone hits the true depths quite like those who write around the Mediterranean. I was going to say the Italians, but in fact my last visit to European noir was the trilogy by Jean Claude Izzo, who was part of the Italian immigrant community in Marseilles, but was, by nationality, French. You might think that the Italians would be a little too sunny for noir, but you would be wrong.

Carlotto's novel is about as bleak as it can get. I'll try not to spoil the first few pages for you, but let's just say that a jewelry robbery goes very horribly wrong and ends in a terrible crime, which leads one of the robbers to end up in jail for this crime, while his accomplice gets away.

Flash forward fifteen years and a man who's life was ruined by this fiasco receives a letter from a lawyer requesting that he help the incarcerated robber be pardoned on compassionate grounds. Although at first the man refuses, gradually it occurs to him that the imprisoned man might be manipulated into leading him to the accomplice, who has never been caught.

I think the book is a great introduction to noir, because it runs counter to many of our more usual assumptions about what makes a good tale. Neither criminal or victim are exactly what you would call role models, but both have a lot of energy and the stakes are very high. One question that the book raises is whether there can be atonement for horrible crimes. I remember being a bit dissatisfied with Ian McEwan's take on this in his own book, which even takes atonement as its title. Basically, he says no. I think this book provides a slightly different answer. I think what Carlotto would say is that there is no easy atonement. You'll have to read the book to find out why I think the qualifier is important.

(This post also appears on the Europa Challenge blog, a site you should definitely check out!)
Posted by seana graham at 8:41 PM No comments:

The Summer Book, by Tove Jansson 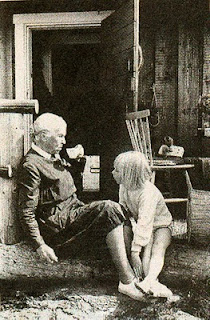 I had a chance to read a very wonderful book last month, thanks to joining up with the New York Review of Books books discussion at Good Reads. The first book that was picked was this short novel by the Tove Jansson. Jannson is pretty famous for her Finn Family Moomintroll childrens' books, though somewhat oddly, not so much in the U.S. I guess Astrid Lindgren of Pippi Longstocking  fame was our token Nordic writer for that era, but I do plan on reading them now.

The Summer Book is a series of related stories about summers spent on a small island off the coast of Finland that center around the lives of a grandmother and her granddaughter, Sophia. Sophia's father plays a somewhat peripheral role. Jansson's niece and her own mother were the models for this very wise book, and the whole family in fact spent much time out on these lonely but beautiful islands.

The discussion we had over on Good Reads was very thought provoking and we all found a lot of things to love about this book. I think for me what was most intriguing was the relation between the very old and the very young, which I think Jansson nailed. Life is a different thing when we are not in the midst of all the striving. I think these two states often have a lot to say to each other, though often in a subtle and indirect way.

Check out this beautiful book if you get a chance. I actually read it in the "Sort Of" edition, which has a fair number of photos. The NYRB edition has a lot of her drawings.

You are spoiled for choice, really.
Posted by seana graham at 8:41 PM 2 comments: