The Pavilion by Hilda Lawrence 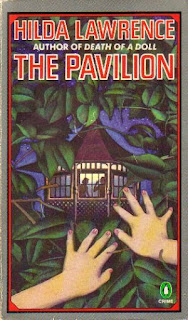 I really enjoyed this atmospheric novel from the forties. Regan, whose mother has died only a month before, decides to visit her Uncle Hurst at his request, as both remember the simpatico relationship they had when she was a small child. But by the time Regan arrives at the Herald family mansion, Hurst is already dead and she is left to fend for herself among his family, his in-laws, and some household servants. At the same time, Regan gradually becomes aware that there is an event in her own past here that she's so far managed to suppress.

The creepy old house has an equally creepy bunch of inhabitants and I enjoyed Lawrence's skill at bringing them to life. Although Lawrence was an American writer and this story is set in a small town on the Eastern seaboard (I think), her characters remind me of certain eccentrics that spring up in British crime fiction--I'm thinking particularly of the earlier work of Margery Allingham.

Cousin May was old, Regan knew that. Older than Hurst, nearly seventy, she thought. But the white hair curled youthfully about her soft face , and foamed and frothed into curls around her jeweled ears. Her round cheeks quivered as she held out her hand.

Regan advanced, full of pity when she saw how each step forward robbed Cousin May without mercy. When she reached the outstretched hand she saw an old, old woman, hiding under a shell of pink powder.

Regan teams up with her considerably older cousin Fray, who does most of the real detective work in the story. But Regan's gradual and intuitive understanding of the situation felt convincing to me and I admired the way Lawrence was able to pull this off.

My copy of this book is an old Penguin Crime series book with the distinctive green spine. I was surprised that GoodReads doesn't offer that particular cover as a choice, as it must have been fairly common at one point.  And Lawrence herself seems a little hard to track down. She wrote other crime fiction, though not a lot, and you would think there would be more reviews and interviews from her day. In fact, the only Wikipedia article I found on her is in French.

I have to admit a particular pleasure in discovering a writer I like who is not currently much remembered. More than with such perennially popular writers as Christie or Sayers, I feel that, against all the odds, a talented author has managed to breach the chasm of time and speak to me directly.

Posted by seana graham at 2:04 PM No comments: