The First Cut is the Deepest, by Martin Edwards 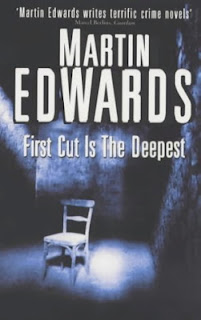 I've been following Martin Edwards' excellent crime fiction blog, Do You Write Under Your Own Name? for several years now, so there's really no excuse for  my not having read one of his mystery novels, especially since I've owned a couple of them for awhile now. That failing has now  been corrected.

The First Cut is the Deepest is the seventh in Edwards' Harry Devlin series, and though it does contain some spoilers for earlier books in the series, there is nothing that will confuse you about its storyline. Devlin has gotten in up to his neck in a compulsive affair with a woman who happens to be married to a big time criminal. Despite his very reasonable fear of Casper May, he still finds himself going out on a stormy night for a rendezvous with Casper's wife Juliet at a cottage her secretary is graciously letting them use.

Yes, it's a bad idea. A couple of catastrophes happen immediately, one of which is murder. I'll leave the  subsequent plot developments for you to discover yourself.

The whodunit aspect of the book was sufficiently complex to keep me guessing--and I made quite a few wrong guesses, which is always good. What I particularly enjoyed about the novel, though, was Edwards' use of his own background (and I believe, actually, foreground) as a solicitor to create an interesting milieu. Devlin has few illusions about the law, and those few he may still cherish are rapidly punctured by one of the various other lawyers who populate this book. He also has few illusions about himself-- he's self-deprecating about his lawyerly skills, and puts down his penchant for crime-solving to being a bit of a nosey parker.

If you spend any time reading his blog, you will soon realize what a gracious and kindly soul Martin Edwards is, so it's actually reassuring to see Harry Devlin, who must be in some sense Martin's alter ego, be a bit jaded and cynical as he goes about his rounds.

Another aspect of the book that I found quite interesting was its Liverpudlian backdrop. I have been to Liverpool once, many years ago, and despite its four most famous sons, found it a bit depressing, with its still bombed out buildings from WWII, and the fact that, despite its large Irish population, St. Patrick's Day found no one in the mood for celebrating. But with a couple more Harry Devlin books under my belt, I might actually consider another visit. Certainly this novel uses a fascinating aspect of Liverpool's history as a crucial part of the story.

As probably everybody but me knows, "The First Cut is the Deepest" is a well known Cat Stevens song. The story makes mention of a version earlier than Rod Stewart's, and even earlier than Steven's own first recording,  and I thought I would seek it out. I'm sorry that you will probably have to put up with a commercial for a few seconds, but it's worth it.

Posted by seana graham at 5:20 PM No comments:

This is the third book in the Toronto Series I've read, and my appreciation has only grown for  John McFetridge's craft. In the guise of a crime novel, which definitely tours the seamy underbelly of Toronto (wait, Toronto has a seamy underbelly?) McFetridge explores a multitude of things--race, Afghanistan vets, 'making it' and what that means, and even post pregnancy career malaise. In this book in particular there is a theme that gets handled by many of the major characters--and there are a lot of them. It might be best described as "Okay--and now what?" As in, "Yeah, I've made it to the top of the crime heap. Now what?" Or, "Yeah, I've gotten married and had a baby--now what?" There's definitely a Peggy Lee "Is that all there is?" tune running through here somewhere.

In the foreground though are a plethora of schemes and deals and plans, people sizing each other up, wondering who to trust. There's a motorcycle gang, which now seems to run pretty much the whole Canadian drug scene but they've outgrown their youthful abandon and now drive around in fancy cars instead of riding bikes. But then, it's not about the bike, is it? Or so another performance enhancer famously said...
Posted by seana graham at 2:57 PM 2 comments: 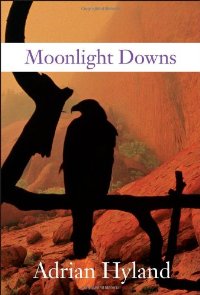 Another book I've been a bit behind in getting around to, as I've heard good things about Hyland's Emily Tempest books for awhile now.

The immediate comparison for a fan of American mystery fiction is to compare Hyland's writing to that of the late lamented Tony Hillerman, who wrote highly readable and well informed mystery novels set in and around the Navajo lands of the Southwest. Hyland is equally knowledgeable about the aboriginal people of Outback Australia, a part of the world he's lived in and where he's interacted with its  native communities extensively.

Hyland provides the bridge to this world in the form of one Emily Tempest, daughter of a white miner and an aboriginal mother. As Moonlight Downs opens, Tempest has exhausted many of the possibilities open to her in white culture, having taken the Western route of college and travel, and now seeking a lost aspect of her identity, returns to Moonlight Downs, the ancestral home of her "mob". These aboriginal people are not her "skin group" by blood, as her deceased mother came from another part of the country, but they are her people by virtue of having grown up with them. Her essential question is, Is this my home?

As this is a murder mystery, that question gets derailed a bit by a killing early on, and Emily's relation to the victim combined with her feisty and determined nature drive her to pursue the killer. It's a well done who done it which I didn't figure out till  near the story's resolution. But as with many of the mysteries and crime novels I read, it's the 'what else?' that really holds my interest. Hyland uses the genre to talk about the interaction of "whitefellas" and "blackfellas" and everyone in between in an area of Australia that might be best equated to an earlier version of the American "Wild West". As Hyland says in this interview, there is a fascinating mixture comprised of an ancient culture living by myths and dreamings residing side by side with the most recent of newcomers, many of whom have blown into this wild space like sand.

So there you have it--an engaging protagonist (and Hyland is a man who can write from a female perspective convincingly), an interesting terrain that he often takes the time to write a beautiful passage about, and a unique intersection of cultures. And there's even a sequel, Gunshot Road, to look forward to. I only have one question.

What the heck is spinifex?
Posted by seana graham at 3:05 PM 7 comments: 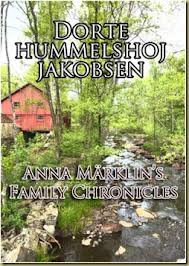 I've been a bit remiss about getting to this book, but not for lack of trying. The author was kind enough to let me download a copy of the book from Smashwords, but neither of my electronic readers seemed to be inclined to take it. (A problem with the ereaders, not the publication.) I'd been away for awhile and decided to charge up my Kobo, and suddenly, voila, there it was.

I became acquainted with this Danish author's work first through her blog, then through some of her short stories, and finally through her mystery novel, The Cozy Knave, which I reviewed HERE. As the title implies, that book was written in the tradition of the British cozy and was a quite successful take on it. But Jakobsen's new book is from a different part of the genre spectrum all together.

It begins with the story of Anna Storm, who makes a shocking discovery in her neighbor Karin's apartment. We don't get to learn exactly what that discovery is right away, however, because the story then sets up in earnest a few months before this event. You know how Shakespeare writes "What's past is prologue"? Well, in this case, what's prologue is the future. I found this a bit confusing, but only because I am not expert enough on my Kobo to get back to the beginning and check dates.

Anna, our protagonist, is at a crossroads in her life. She is unemployed and having a lot of trouble making ends meet, and also seems to be feeling a bit ambivalent about her fiancé, Lars. Meanwhile, Anna receives the bad news that her father is dying and besides feeling grief, also realizes that this may well be the last chance she has to learn about her father's mother, or farmor, about whom her father has always been reticent.

This leads to the second major thread of the story, in which we are treated to the diary/sketchbook of Anna's farmor. Anna Märklin wrote and sketched in it when she was only a young teenager in Sweden. Although we can't see it, Anna describes what she draws effectively enough for us to visualize it. As her granddaughter Anna Storm begins her own quest to find out what happened, we also get to see the story unfold through Anna Märklin's eyes.

I was really taken with this book. I have had a lot going on in my own life in the last week or so, but I really found that I could hardly put it down. I had a suspicion about one of the several mysteries that this book reveals, but that hardly mattered. For me, the two biggest strengths of this book are the way Anna Storm's story is told, so that we both see and don't see what is going on, and secondly, the very beautiful passages in the girlhood diary of Anna Märklin, highly evocative and, as the story grows darker (as you know it will) very moving. In fact, I think some of these passages are the best work that Jakobsen has done.

And it's all very, very far from The Cozy Knave, which is neither a good thing or a bad thing, but only goes to show how impressive Jakobsen's range really is.