Falconer at EIL, and personal news 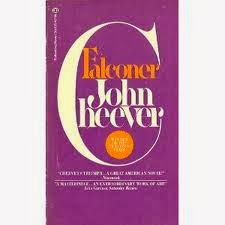 I've put up another review at Escape Into Life, this time on John Cheever's Falconer. Although for the sake of people finding it who might be interested, I used the current cover over there, I actually read an old pocket book edition, which seems to be my preferred mode these days. Adds a certain period feel that I enjoy. So I'm using that cover here.

On a personal note, and if you read my Confessions of Ignorance blog you may already know this, I have a story up at One Teen Story, thanks to a workshop I took there. You can read "Inconstant Moon" HERE if you are so inclined. If you have an interest in writing short stories, I would recommend signing up for their blog, because they do this workshop every so often. You get a lot of prompts to work in, and for some reason that challenge helps you puzzle out a story. It's fun.
Posted by seana graham at 11:31 AM No comments:

The Haiku Apprentice at EIL 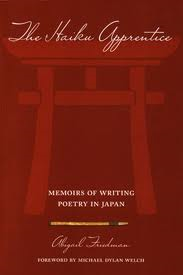 My review of The Haiku Apprentice by Abigail Friedman is up over at Escape Into Life now. I was happy to pull this extremely winning account of an American diplomat's study of haiku in Japan out of the memory closet for a new round of readers. Check it out here. And while you're there, you'd do well to check out some of the recent art and poetry features as well. I saw Caravaggio's paintings in a new way when aligned with Andrea Potos' poems, and, though Halloween is past, I enjoyed the haunting poems feature, illustrated by the eerie art of Dan May.
Posted by seana graham at 12:03 PM 2 comments:

Having just recently read The Stranger for the first time in practically my dotage, I now am preening a bit on reading it in the year of his centenary. Purely by chance, but you preen where you can. I wouldn't have known it was his birthday today except for some random postings that rolled up on my other blog's blog roll. As I don't have a new review of anything by him, here are a couple of links, which both tend to stress his Africanness (even if Algeria, as yet, does not).

The Guardian tells us that neither France or Algeria are putting up much of a fuss this year.

And Tim Allen at the Oxford University Press blog argues that Camus should be considered as a Francophone African writer, as he lived in Algeria until he was 27. Do check this out for some lovely translations by Allen of Camus' words. There is a very beautiful passage about Algeria, and I'll take the liberty of quoting Allen's translation of Camus' credo right here:

“I know that my inspiration is in The Wrong Side and the Right Side, in this world of poverty and light where I lived for so long and whose memory still keeps me away from the two opposing dangers that menace every artist: resentment and satisfaction. […] I was placed halfway between misery and the sun. Misery kept me from believing that all is well in this world and with history; the sun taught me that history isn’t everything.”

My own personal intention for honoring Camus is to finally read his posthumously published and incomplete work The First Man (Le premier homme),  a novel based on his youth in Algeria, which my aunt had asked me to read and which I unfortunately did not get to while I could still share it with her in a meaningful way. But in honoring him, I will perhaps fulfill a tiny portion of the debt I owe her too. 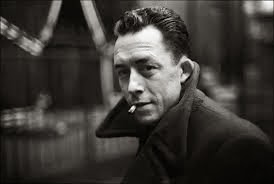 Posted by seana graham at 1:01 PM No comments: