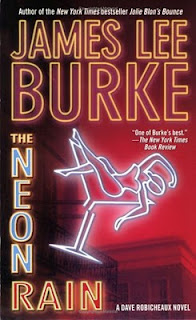 Over on  her blog Inspirations, Glenna has credited Declan Burke of Crime Always Pays for introducing her to the current Swedish sensation, Three Seconds, by Roslund & Hellström. But that's nothing. Burke's powers of persuasion are apparently so great that he can get you to read a book he didn't even read. At least that's the way it worked for me.

I have a bit to do--well, more than a bit--with keeping the mystery section stocked at the bookstore I work for. So it's a pretty sad state of affairs that I have not read a James Lee Burke novel until now. He's obviously been recommended many times to me, and although it's sometimes the case with bestselling writers that I dismiss their work despite its commercial appeal, that wasn't the case here. In general, though, if a writer already has a huge fan base, I don't necessarily see my function as anything more than making sure their books are in. My endorsement adds virtually nothing.

I could give you the link to Crime Always Pays now, but then what would be your motivation to keep reading along here?  Let's just say that Declan's explanation that he had not read a Dave Robicheaux novel in part because he would not have time, as a professional reader and reviewer, to go all the way back to Neon Rain, which is some 18 books ago, perversely freed me to think, "Hey, but I could read Neon Rain." And so I did.

I have to say that the time may have been more ripe for me to read the book now than it would have been even six or seven years ago. That's first because I have now actually been to New Orleans, where much of this novel is set, and second because the New Orleans of today is not the same place post-Katrina that it was in 1987, when Neon Rain was published. Of course, much of its spirit and even most of its landmarks remain, but there is a ghostly quality that time and circumstance have given this book, which adds an extra patina to its appeal.

Much has already happened to Dave Robicheaux by the time this books opens, and one suspects the author as well.  There's a Dantesque "Nel mezzo del cammin di nostra vita mi ritrovai per una selva oscura ..." feel to it, and in fact I wondered if I had missed some earlier books. But no. Just as Michael Connelly starts Harry Bosch's adventures well after his early career as a Vietnam tunnel rat and finds him (somewhat) solidly working for the L.A.P.D., we find Robicheaux after his failed marriage, and in recovery from more than one kind of addiction. The book opens with what will catalyze him out of whatever normality his job and stature give him. He finds out from a condemned man that he has stirred up trouble and if he doesn't get out of it, he is a condemned man himself. He soon learns that his troubles began when he pulled a dead black girl out of the Bayou. Everyone wants to dismiss this as an overdose. Everyone but Dave.

The quest to solve the mystery, or stay out of trouble, or both, let's Burke and his beloved New Orleans on full view. This is gritty crime fiction, and Robicheaux is a hothead, but side by side with the seamy crime world are some of the most lovely descriptions of city and surrounding bayou country you are ever going to want to meet. The descriptions of people, though my no means always lovely, are excellent too.

Here are some non-spoilerish selections:

"Cletus's face looked like it was made from boiled pigskin, except there were stitch scars across the bridge of his nose and through one eyebrow, where he'd been bashed by a pipe when he was a kid in the Irish Channel. He was a big man, with sandy hair and intelligent green eyes, and he fought to keep his weight down, unsuccessfully, by pumping iron four nights a week in his garage."

"I pretended to be a pragmatist, a cynic, a jaded war veteran, a vitriolic drunk, the last of the Louisiana badasses; but like most people I believed that justice would be done, things would work out, that somebody would show up with the Constitution in his hand."

"I took the streetcar down St. Charles Avenue to the Garden District. It was wonderful riding down the esplanade with the window open under the trees, the iron wheels clicking on the tracks, the sunlight and shadow flicking across my arms. At each stop, black and working-class white people and college students waited in the shade of the oaks and palm trees, and black teenagers sold ice-cream bars and snow cones out of bicycle carts, and the sidewalk cafes in front of the hotels had already started to fill with the early supper crowd. For some reason, every day in New Orleans seems like a holiday, even when you have to work, and there is no better way to enjoy it than rattling down the esplanade in a breezy streetcar that has been running on these same tracks since the turn of the century."

That's the 19th century folks. And though that final sentence comes from near the end of the book, it gives nothing away, and by the time you reach it, I can only assume that you will want to read it again.

Oh, yeah, Declan Burke's post? That would be here. 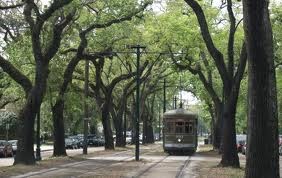 Posted by seana graham at 5:17 PM No comments:

The 100 Thing Challenge, by Dave Bruno 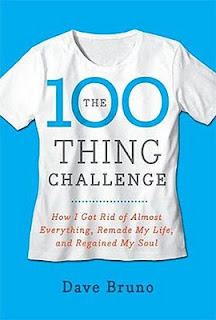 Every once in awhile, I succumb to what broadly speaking might be termed a self-help book. Frankly, I'm kind of past the point in life where I am going to change my personality or habits much, at least for the better, but sometimes such books have a fleeting, galvanizing influence. In particular, I seem to be a sucker for the organize/declutter/get your life in order type of books. To say that the books' influence doesn't last is not a criticism, just a statement about the monkey nature of my own mind.

Dave Bruno, a thoughtful family man living in San Diego, began wondering if he was really walking the walk that he was talking in terms of simplicity and anti-consumerism that he'd been writing about on his blog and probably talking with others about as well. He began to ponder the ways in which things were actually keeping him from living the sort of life he aspired to live. Accordingly, he set himself a challenge: to pare back and live with only one hundred things as his personal possessions for the timespan of one year. The book is a chronicle of his attempt to first identify, second unload, and finally live without the extraneous material things in his life. The results were, and are, illuminating.

One thing that the book brings out is the way that we invest things with a significance far beyond what is actually inherent in them. Bruno is open and candid about the way some of these objects operate in his life. As he has it, there are objects that we keep in the hope that they can somehow repair the past. There are those we keep because they keep some dream or illusion we have about ourselves alive. A particularly interesting part of his story is the way he dealt with his collection of woodworking tools. It wasn't that Bruno never did woodworking--it wasn't that kind of illusion. The illusion was that he would somehow gain mastery by possessing these very special tools. Mastery is a very interesting obsession. I remember my teacher of Ancient Greek arguing against the concept many years ago. He thought that the idea of mastery of a subject put us in an uneasy and unfruitful relationship to it. In some ways, the aim of study is to let a subject master us. To dream of mastery is more about the myth of our own power and so ultimately a dead end.

Personally, I'm not a huge stuff accumulator. The areas that I have problems in are the accumulation of books and the amassing of paper that I don't know how to get back under my control. I'm not a shopper in any of the usual sorts of feminine scenarios, and will do a good deal to avoid a trip to the mall. But it's always interesting to think of these things in relation to your own 'problem areas'. I was curious, then, how Bruno dealt with books in his one hundred thing challenge.

Very neatly, I would say. Books came collectively under the heading "One Library".
Posted by seana graham at 7:41 PM 4 comments: