The Post-Office Girl, by Stefan Zweig 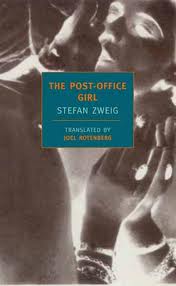 I really enjoyed this bittersweet novella of Zweig's. I'd long heard of  him but this was my first plunge into his work. It's a bit of an anti-Cinderella story, I suppose, where the princess does get to go to the ball, but the prince doesn't bother to come find her later. Christine is working in a remote Austrian village in between the two Great Wars. Her mother is an invalid, they are poor and Christine works at the post office, without much hope of change. Out of the blue a wealthy aunt extends her an invitation to join her in a luxury hotel, and Christine begins to live, breathe and dream again. We've had a great discussion over on the New York Review of Books discussion forum over at GoodReads , which is an open group--feel free to join us--we're on to Berlin Stories by Robert Walser.

There is a lot to say about this book, but as someone pointed out to me early on, Zweig was exquisite at rendering subtle psychological states. I was particularly struck by this one, because it shows the mind still remembering its cage:

In this new world even sleep is different: blacker, denser, more drugged, you're completely submerged in yourself. As she awakens Christine hauls her drowned senses out of these new depths, slowly, laboriously, bit by bit, as though from a bottomless well. First she has an uncertain sense of the time. Through her eyelids she sees brightness; the room must be light, it must be day. It's a vague, muffled feeling, followed by an anxious thought (even while she's still asleep): Dont' forget about work! Don't be late! The train of thought she's known for the last ten years begins automatically: The alarm clock will ring now... Don't go back to sleep... Responsibility, responsibility, responsibility... Get up now, work starts at eight, and before that I'll have to get the heat started, make coffee, get the milk, the rolls, tidy up, change mother's bandages, prepare for lunch, and what else? There's something else  I have to do today...Right, pay the grocer lady, she reminded me yesterday...No, don't doze off, stay alert, get up when the alarm goes off... But what's the problem today...What's keeping it...Is the alarm clock broken, did I forget to wind it...where's the alarm, it's light in the room...Goodness, maybe I overslept and it's already seven or eight or nine and people are cursing at the wicket the way they did that time when I wasn't feeling well, right away they wanted to complain to the head office...And so many employees are being let go these days... Dear God, I can't be late, I can't oversleep...The long-buried fear of being late is like a mole tunneling under the black soil of sleep. Abruptly the last of it falls away.

It seemed fitting that my blog friend PQ was talking about a similar supression of life over on his blog, A Building Roam , where he is currently much taken with Robert Anton Wilson, among others. Here, he is quoting Buckminster Fuller, a figure not unknown in Santa Cruz:

Let us regard wage-work---as most people do, in fact, regard it---as a curse, a drag, a nuisance, a barrier that stands between us and what we really want to do. In that case, your job is the disease, and unemployment is the cure.
"But without working for wages we'll all starve to death!?! Won't we?"
Not at all. Many farseeing social thinkers have suggested intelligent and plausible plans for adapting to a society of rising unemployment.

The mentality of the wage earner seems to be reported on from many angles in my life right now, and not usually in the most positive light. It makes me wonder what is coming...
Posted by seana graham at 7:35 PM 2 comments: 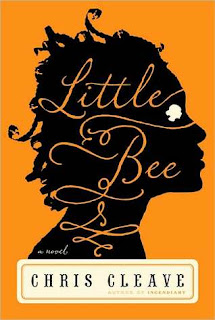 Nigeria has been in the news again recently. Although this time it seems to be about an extremist group's demands, and not oil, it seems an appropriate time to have read Little Bee, a novel based around another time of atrocity in Nigeria. The protagonist of our novel is set on her journey in the murky world of illegal immigration because her village just happens to be sitting on top of a vast reserve of 'black gold'.

This was a reading group pick, which was why I finally got around to reading the copy on my shelf. Cleave is a good writer and I will definitely be picking up more of his work, but I did not totally buy this particular story. There is a crucial scene on a beach which marks all the characters in a way that will affect the future, and though the idea was good, it didn't play quite right to  me. Almost right, but not quite right, which is the kind of thing that can take you out of the story.

Nevertheless, the collision of the refugee and the liberal but privileged set is well done in this book. I think one of the best lines in the story was when Sarah, a journalist who had started out editing a magazine which was supposed to be educating people on the world, but which has gradually been co-opted, says that she wanted to make a difference and someone responds, "We all want to make a difference, but everything has its time and place." Because of astute assessments of our sensibilities such as this one, I really wouldn't want to put anybody off reading Little Bee, which is loaded with nuggets like that.

And Little Bee herself is quite irresistable...
Posted by seana graham at 2:10 PM 2 comments:

Type, a bookstore in motion

Instead of me writing another review, how about another video? Canadian crime writer John McFetridge made me aware of this one.

You didn't listen to me the last time, did you? Well, don't worry about it, hardly anyone ever does. I'm giving you a second option. You can listen to this guy instead...

Posted by seana graham at 7:54 PM No comments:

Smoke, by Nigel Bird and The Point, by Gerard Brennan 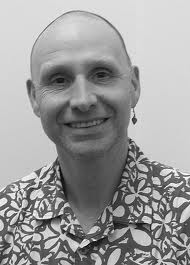 Bit of a problematic blogpost, this one, but I'm going to do it anyway. I happened to read these two novellas, both nominated for the Spinetingler Award, one right after the other, and found the parallels striking enough  that I thought I'd do them together, rather than separately. Unfortunately, in the time that's elapsed between now and then, Smoke seems to have been withdrawn from circulation for the moment, due, I'm guessing, to some larger troubles at the press it was published by. That's a can of worms that I don't really want to get into here, but I'm going to assume that Smoke will be made available again soon by one means or another.

I read Smoke in ebook form, while The Point I read as a physical book. I think I enjoyed reading in the old school form marginally more, but with novellas, it isn't a terribly large issue either way, and I actually think novellas are highly suited to the ebook format.

Smoke begins with a simple enough school incident. Our hero, Jimmy, gets pantsed by the school bullies and as he of course decides to take his revenge, events soon spiral out of control. I was a little slow on the uptake here, but Smoke actually continues on from a  fine short story I read in the Mammoth Book of Best British Crime 8 called "An Arm and  a Leg", and I wish I'd reread that one before reading this story. If republished, I think including both in one volume might work rather well.

The community is Tranent, a working class British community where let's just say a lot of illicit activity is going on. I don't know that you'd call it tight knit, but it's the kind of place where everybody knows everybody else's business, including what's hidden under Nan's bed. There are a lot of skillfully interwoven story arcs to this brief tale, and everyone is pretty much after everyone else's loot, or even life. 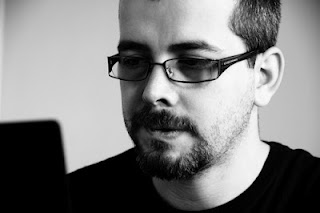 Gerard Brennan's The Point focuses on another working class community, this one a  rough Belfast neighborhood. When brothers Paul and Brian find themselves needing to lay low, though, they head for Warrenpoint, a  seaside resort town that they remember as idyllic from their otherwise not so idyllic childhoods. There they meet Rachel, a girl with some troubles of her own. The encounter of the three of them, not to mention the various thugs that they inevitably get involved with, leads them to their own madcap festival of mayhem. I liked the brief titled chapters of this one, which helped keep things moving right along.

I still find myself a bit surprised to be reading crime fiction that centers on so much violence, boozing, drugs and sex. Not to mention dog fights. These are "guy books" in a big way, so I think it's fair to say straight off that they might not be for you, if I have any idea of who the typical readers of this blog are. Which, actually, I don't. If you're looking for fast paced gritty thrillers with more than  a bit of edge, these are just up your alley. I admire the talent and craftsmanship of both writers and will continue to read more.

While you wait for Smoke to be reborn, why don't you check out Nigel's short pieces on Smashwords? Oh, and did I mention that he is in the probably all too often mentioned here Grimm Tales as well? In fact, he won first prize in the original story contest for "Sing a Song of Sixpence". 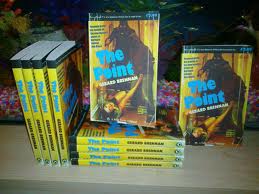 And once you've read The Point, which won the  2012 Spinetingler novella award, you can then go on to Mr. Brennan's Wee Rockets, which I have ahead of me as well.
Posted by seana graham at 1:36 PM 5 comments: