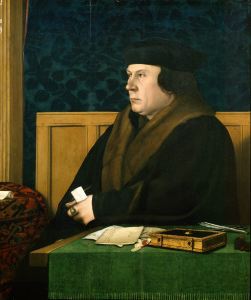 This is simply a gorgeous book. I'm not actually a huge fan of the historical novel in general, as I find it something of a strain separating fact from fiction in them, but occasionally I read one that, as a friend recently said of this one, seems to be channeled.

I'm also not a huge devotee of the Tudor historical industry that others find endlessly fascinating. I watched "The Six Wives of Henry the Eighth" and then Glenda Jackson's "Elizabeth R." way back in my youth, and thought that was enough to be getting on with.

However, it turns out I was wrong. Turns out that I really did want to wade through five hundred plus pages on Thomas Cromwell, which is not even the whole life. Who knew? I mean, before I started this book, I thought Thomas Cromwell and Oliver Cromwell were the same person. (I guess I wasn't watching the TV series all that closely...)

The reason I wanted to read this book, the reason it won the Booker Prize last year, the reason more than one person has told me they want to live in its world (and this is the England of deathly fever and death of heretics by burning, remember, so that's saying something), is because of the beauty of the language and i's extraordinary, luminous style, and perhaps, above all because of Mantel's empathy toward her  subjects, and her greathearted compassion.

It does not give much away to say that this book begins with Cromwell's boyhood as a blacksmith's son and charts his rise to being the confidante of Henry Tudor himself, precisely when he is embroiled in the affair of trying to oust his first queen and replace her with Anne Boleyn.  Cromwell always saw what needed to be done, and did it. In Mantel's view, this did not make him ruthless, it made reasonable--and one of the few such around. 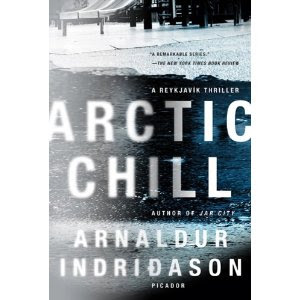 Looking back through my blog posts here, I'm surprised to see that I haven't written up anything on Icelandic crime writer Arnaldur Indriðason yet. This is the fourth book of his I've read, although fifth in the Detective Erlendur series as far as the ones that have reached America go. Oddly, the first two books in the series have not been published in the U.S. (I'm kind of baffled by how frequently books in translation reach us in the wrong sequence--it's okay with 'regular' novels, but it doesn't make much sense with series.)

Arctic Chill is the story of a murder investigation into the death of a young boy of Thai descent who is found frozen in the snow outside an apartment block. Arnuldur (last names aren't really used in Iceland, which is lucky for me, because his patronymic Indriðason is one I must resort to cut and paste to print) uses this situation to examine many different kinds of attitudes toward the steadily growing foreign population that has come to what previously has been a very insular, one race culture. I expect that in the time since this book was written many of the guest workers have gone home. But as this book makes clear, even when things don't work out, there are wives left stranded in the wrong hemisphere, children of one culture born in the homeland of another, and people caught between two worlds, who can't negotiate the gap. And I do have to say that all the way through the book, I felt a kind of shivering pity for all these Southeast Asian people having to endure a world of winter and snow.

I liked this outing, though it wasn't my favorite. Part of this was probably due to a fairly clumsy and confusing translation, which I have since heard was due to the death of original translator Bernard Scudder midprocess and the attempt to finish the project by someone else. But I think some of it was just due to the fact that we have less of Erlendur and his doleful family drama than in the others. Erlendur left his wife with two young children early on, and due to the bitterness of that separation he lost contact with his children. They in turn have not fared so well without him. One of the continuing strengths of the series is the strained and in some cases terrible relation between Erlendur and his drug using daughter Eva Lind. The kind of hopeless yet somehow hopeful connection between them seems very real, and one of the uses of series books is that situations like this can go on without being resolved neatly at the end.

As a child Erlendur lost his little brother in a terrible snow storm. He was not at fault, but still feels perpetually guilty. How a tragic event can shape the life of a survivor, and how that in turn affects the lives of all who try to connect with him is also one the continuing themes Arnuldur explores in an aching, understated way.
Posted by seana graham at 8:02 AM 7 comments: 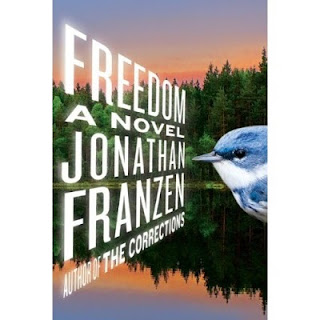 Jonathan Franzen's Freedom is probably the big book of the fall, for more than one reason. For one thing it's a Very Big Deal in the publishing world, which has its own mysterious laws. For another, it's just a big book physically, at well over five hundred pages. And it's also big in its ambitions and ideas.

I've read it, but I'm not going to review it here. Partly it's because I don't feel quite up to the task, and partly because this book really doesn't need any further help from me. Of the several things I've read about it so far, I think this New York Times Book Review piece by Sam Tanenhaus was the most helpful, though I'd recommend reading it after you read the book rather than before.

Personally, I would and will read anything Jonathan Franzen cares to write, just to make my own position clear.

I thought instead of a book review, I'd mention something funny that happened a couple of nights after I finished the book. I was watching a performance on PBS and one of the characters gleefully said "Freedom for everyone!"

Well... that character was Don Giovanni, surely one of the archetypal villains and libertines of Western Civilization. And as a matter of fact, there is a Don Giovanni type in Franzen's book, in the character of Richard Katz, punk rock star and seducer, though by no means as black and white or one dimensional a character as the Don. In any case, this particular vision of freedom is one of the many types that Freedom is written to illustrate and explore, so I watched the rest of the opera looking for parallels.

During an intermission, there was a brief interview with the conductor, Donald Runnicles. He said that at the end of the opera when Don Giovanni has met his just fate, it's interesting to see that the other characters are left with a kind of blank space or vacuum in their lives. And it's certainly true that Freedom would have been the poorer without Giovanni's latter day avatar. What this says about demonic energy, I really don't know. 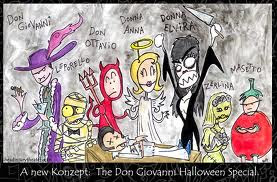 (The cartoon, by the way, is from a site called Head Injury Theater.com)
Posted by seana graham at 11:38 AM 4 comments: