A Corpse in the Koryo, by James Church 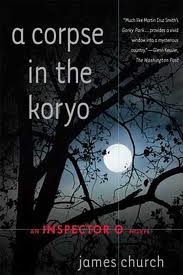 (Updated to say that I am happy to report that despite my own problems obtaining a copy a few weeks ago, A Corpse in the Koryo now seems to be readily available. Grab one while it's easy to get. These days, you never know.)


I don't know how it is for other people who work in bookstores. Sometimes it seems to me that they always read everything they plan to read in a timely way, and can recommend new titles in their chosen areas of interest with ease. I imagine that they get off work, grab a quick snack and then go home and plow through a couple hundred pages before the evening is over.

For me, it's more hit and miss. I know about a lot more books that I'd like to read than I am ever going to get around to, and although that's not necessarily a wholly bad thing, being a bookseller adds an extra pang to it. Here's an example of why.

I noticed James Church's first novel, A Corpse in the Koryo, as soon as it came in in paperback. It had a distinctive cover, and I saw that it was set in Korea. I don't think I noticed that it was about North Korea. Somehow, I got it into my head that this was one of those travelogue mysteries that can be quite fun to read from time to time, but really are in a way a form of cozy. So it fell down the "so many books, so little time" list. It wasn't until I saw an article on Slate about the series that I realized that these books were likely to be one of the more penetrating looks into North Korea that we are likely to have in the fictional world for awhile. After looking at the article, I thought, great, I'll read the first one and if I like it, I'll get some in for the store and start selling it.

Unfortunately, this was not to be. The book had become unavailable through the usual channels and I had to get it from a used book dealer. What's upsetting about this is that as the fourth Inspector O novel, The Man With the Baltic Stare,  comes out, the first in the series is not readily available to people. As any mystery reader knows, this matters in a series. (A commenter has since posted in to say that they found it on Minotaur's website, so please try that, if you are interested in the book)

In case you think this is a fault of the first book, it isn't. Church (which is a psuedonym used by a former western intelligence officer) comes out of the gate strong. He's got a great character in Inspector O, and he conveys his setting beautifully. The mystery is well-plotted, and the pieces all come together. All that was missing was the publicity team that might have gotten it out there in a substantial way.

What was personally most important to me, though, was the shattering of my own images. We've all seen the perfectly choreographed mass displays and the stories of detentions of outsiders. Naively, I've assumed that the people have simply been brainwashed and know no other way. What Church is asserting is that this is far from the case, and that the North Koreans live under a totalitarian regime in much the same way you and I would live under that regime if we were so unfortunate as to have to do so. We would avoid what we could, endure what we couldn't and live an inner life that was, pardon the stereotype, inscrutable. If you want to know something of that inner life, read one of the beautiful poem fragments that Church starts his sections with. Here's one:

At dawn, the hills wake from the mist,
One row, then another,
Beyond is loneliness
Endless as the distant peaks.

And while we're on it, here's a review of the book I really liked.
Posted by seana graham at 8:01 PM No comments:

The Sea, by John Banville 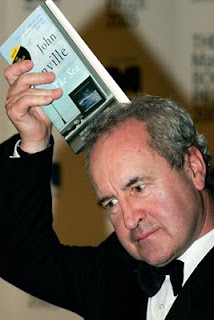 It's been awhile since I've done one of these pre-bookgroup, post-bookgroup reviews. That's because, for various reasons I haven't been to the group in awhile. But this month I read the book and am going to the meeting.

I've read a couple of other Banville novels, as well as an interview with him. He is talked about on one or two of the blogs I read, though most often in his alterego persona of Benjamin Black, the name under which he writes his crime novels. Although it's simplifying things a bit, crime novelists seem to be a bit put out by his condescension about their genre. On the other hand, he does seem to continue to enjoy writing these books, so possibly for him it's just a matter of putting on different writerly hats.

I'm very curious what the other members of my book group will have to say about this one. As in the last one I read, Eclipse, I find his prose style to be excellent but his storytelling a bit too removed and rarified for the likes of me. "Exquisite" is the word that comes to mind, with the full range of its connotations.

The Sea is a story about grief and loss, and having recently experienced the death of my mother, obviously such subjects would be interesting to me. The main grief, or the most obvious one that  Max Morden character is experiencing is the recent loss of his wife to cancer. The narrator is obviously grieving deeply, but his detachment in telling of it never really let me in to the experience. He does give some hint of who his wife was, but there is oddly little about the experience of being married before the onset of illness, though this  final stage is described acutely.

The real subject of the book, and where all the narrative interest lies, is a family Max became involved with as a child on a seaside holiday. They belong to a different, higher social stratum than his family, and he is early fascinated by them. They are, in fact, odd and fascinating, though not what you would call likeable. The father is a kind of satyr, the mother an earth goddess, the twins oddly alienlike, and then there is the enigmatic Rose, who appears to be some kind of governess.

Unfortunately for me, this all felt a bit too much like an indie movie that I had seen one or two times before. I don't know that this is really fair to the book, and obviously it didn't mar the experience of the judges for the Man Booker prize, as they awarded Banville it in 2005.

I have to say that his early book  Kepler, which was a biographical novel about the early German astronomer, was much more interesting to me when I read it some years ago. It seems to me that Banville's aesthetic impulse is to grow quieter and quieter and more detached. It will be interesting to see tonight if this is more congenial to others than it was to me.
Posted by seana graham at 9:13 AM 2 comments:

One thing should probably be stated from the get go. Mr. Reardon is a 'virtual' friend of mine, and I won this particular book by winning a contest on his blog. Furthermore,  my particular demographic is not the target audience for this book, as the author states himself in a recent interview:

"The audience I had in mind when I wrote it would be adults around ages of thirty to fifty, who enjoy pop culture and may not be avid readers. I think it is a known fact that men are not reading much overall. I wanted to write a story that a guy could read in a few sessions, be entertained, and maybe decide to start reading some of the great crime fiction that is out there today."

So let's start from the point that I think this is an absolutely terrific goal, and one that this book meets. If Mindjacker can be seen as a gateway drug to the world of fiction, then I think it's entirely successful.

But this begs the question a bit. What does Mindjacker have for me, not a man, and who am an avid reader? A lot of fun, that's what, though I may not have read the book exactly as the author had in mind.

I'd describe Mindjacker as "Swingers meets Michael Crichton" (in his sci fi thriller mode). There's a diabolical mastermind--a guy who the story says should have cut off his ponytail a long time ago (a sentiment I could relate to, particularly in the town I live in)--a device that messes with people's mind (literally), but more than that there are a bunch of guys wandering around trying to get ahead of this situation, but mostly meeting up, making friends, comparing their take on music and having a pretty damn good time fighting evil, flying around the country, and saving the day. Even though women are a bit in short supply in this story, the women who are there come across pretty well, though one or two may come to, uh, tragic ends.

Music is important to the author and it plays an important role in the book. If you are more playlist oriented than I am you will probably have fun checking out this post. I mean, I had fun checking it out, but I am not adept enough to have it playing while I was reading.

Sean Patrick Reardon says the  book he is working on is provisionally called "Sissy Murphy". Good title, and I'm looking forward to the results.
Posted by seana graham at 8:42 PM 8 comments: