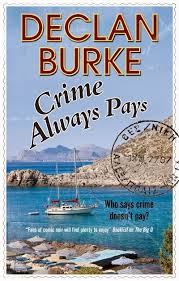 I should start out by saying that this book is a sequel to the terrific The Big O, and if you can get your hands on a copy of that first you would be well advised to do so, as this novel essentially takes off where that one left off. That said, though, the back story is very well covered in this book, so you should be able to make your way.

In truth I needed a bit of a reminder about the back story myself, because it's been awhile since The Big O came out. And it's not the author's fault that the sequel has taken awhile to come our way. Here's what I handily wrote on Good Reads about the book's unfortunate publishing trajectory when it was all a bit fresher in my mind.

"Burke drew the short straw when in a fit of downsizing, Houghton Mifflin not only cancelled the paperback, but cancelled the sequel. Shortsighted of you, HM, or I guess that's now HMH, because now they're merged into a larger conglomerate."

Anyway. Crime Always Pays was then by default self-published as an Amazon ebook, but recently it's come into its own again with Servern House. I gather that the subsequent revisions make it a somewhat different book, but I dutifully begged an e-galley rather than reading the old free one that was on my computer so that I would get this right. But this all makes for a gap of about six years between two books which probably are better read in a shorter timeframe.

If The Big O was like the home game, then Crime Always Pays is like the away game. (And yes, take a screenshot, because that is likely to be the last time I use a sports metaphor in a book review.) The Big O takes place in Ireland, but Crime Always Pays has pretty much the whole cast of characters taking off for the Mediterranean, mostly Greece, though one person is under the delusion that he is headed for Sicily.

Burke starts spinning the plates early on, and by the end your own head may be whirling as well. Without meaning to be pretentious about this, the phrase that kept coming to my mind was "Shakespearean comedy". No, it's not written in iambic pentameter, though the prose is excellent-if you can slow down long enough to take it in, that is. It's more the kind of breathless whirl of mistaken identities--who is on whose side?--and a certain fluidity of personality that seems to overwhelm all the cast of characters. And there are a lot of twists and surprises along the way.

For all the possible romantic combinations in the story, though, it is unlike Shakespearean comedy in one aspect-- it does not end in a wedding. And perhaps if there is one thing I miss from the first novel, it's that the partnership of Ray and Karen is not much in evidence. They are aware of each other throughout the story, but are not acting in tandem. Which is a bit unfortunate, as the Ray and Karen meetup was one of my favorite things about the first book. Read the first chapter free on Amazon if you don't believe me.

Still, you can't have everything, and Crime Always Pays is an entertaining romp in its own right. It would be just the thing to take on a Mediterranean cruise.

How Long Will I Cry?: voices of Youth Violence, edited by Miles Harvey 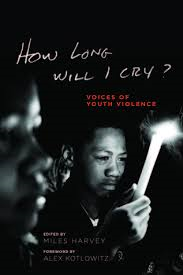 I realized that I should put up a link to my book review of How Long Will I Cry: Voices of Youth Violence. It's at Escape Into Life. Sometimes the reviews that I put over there are a bit random, but this one wasn't. The book was suggested to me by Kathleen Kirk, who handles the poetry end of things over there, but is also the chief factotum, whether officially or no. I don't know how she came across it, but I suspect that her connection with Illinois theatre may have had something to do with it, as the book was originally inspired by the effort to mount a theatre production based on the lives of Chicago youth in neighborhoods in which there is a lot of violence.


My own interest in the project was piqued by the fact that, for ten years, my cousin Ann Graham Deuel ran a home for at-risk kids on the South Side of Chicago called Jamal Place. Blond blue-eyed woman from outside the city though she is, her efforts for the kids who had been dismissed by the powers that be paid off, although trends in funding proved ultimately disastrous for her project. I think the book, among other things, shows that this result is not unusual. Just as the kids are vulnerable to the point of life and death, so are the programs that get off the ground to help them. Although my review points out that individual efforts are crucial in individual lives, in fact, without a societal will to change the story in the kinds of neighborhoods depicted in this book, what one person can do can turn out to be quixotic. This isn't a reason to despair, however. This is a clarion call to action.
Posted by seana graham at 9:12 PM No comments:

Summertime, All the Cats are Bored, by Philippe Georget 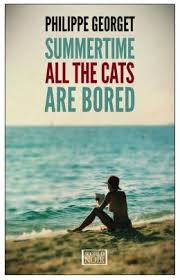 In what may be a bit of reviewing overkill, I've put my review of Philippe Georget's international bestseller up at both Escape Into Life and The Europa Challenge Blog. I think it's good to get some crime fiction up over at EIL, and as this is a Europa title, I wanted to get the word out over there as well.

I know--it's not summertime yet. So sue me.
Posted by seana graham at 2:13 PM No comments: