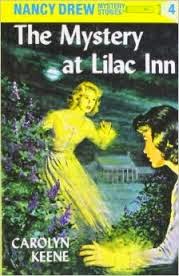 I know--you think I jest, right? But no. After I lost my backpack on a trip north a week or so ago, I found myself without any of the reading materials I had brought along for the journey and so started looking over my sister's shelves, where I was staying. It was going to be a short visit, so I didn't want to get into anything too long, and frankly my brain was a little fried from the mishap, so I wasn't looking for anything too heavy, either. She had a few old Nancy Drew books shelved amid more substantial fare, and as I in some ways associate Nancy Drew with convalescence, the fourth book of the series seemed quite apt.

This is the one where Nancy and her friend Helen canoe up a river to an old inn which their friend Emily and her soon to be husband Dick are renovating as a bed and breakfast. It doesn't take long for trouble to find Nancy, though, as their canoe gets rammed straight off the bat by an unknown assailant. The inn has its share of problems too, and on top of all that, Nancy has a mischievous and very talented double.

There were several things that surprised me about the book. First off, it's a nice twisty suspense tale, somewhat improbably in parts, but logical enough if you allow its premises. I was a little unprepared for how uncozylike it was in feel, including an explosion, a truck running a car off the road and near death by drowning to name but a few incidents.

Another thing I was unprepared for was the respect Nancy received from men and women alike. Her competence was treated as a given by everyone, perhaps with the exception of one or two baddies. Not only does everyone treat her as a real detective, but she is pronounced by the local paper as the best in her skin-diving class, and so on. Although she is described as exceptional, there is no indication that this is particularly so because she's a woman. I liked the way that Nancy was able to fit comfortably into more conventionally feminine situations like getting ready for a wedding and fixing up and old house, but reserves herself for other things as well. At the very end of the book (not a spoiler), her friends apologize for talking about there steady partners, but she cuts them off, saying that for the present, her steady partner is going to be mystery.

Although this cover was the iconic cover of my childhood, I happened to notice that this 1961 edition was actually a newer version of an original tale told earlier. Looking this up on Wikipedia, I learned that the series was revised at the insistence of the publisher and part of the reason was to remove racial stereotypes from the original series, although the solution was apparently to eliminate non-white characters all together. And the novels were also shortened considerably, going from 25 chapters to 20. This is explains the feeling I had in several places of the mini-crisis at hand being resolved and accepted awfully quickly.

The article does say, though, that some of Nancy's rougher edges and more confrontational stances are smoothed down a bit in the versions I read as a kid and they find her a little too relentlessly upbeat. Perhaps.

Wikipedia also discusses a trenchant criticism by novelist Bobbie Ann Mason, who finds Nancy too WASPish and privileged. And indeed there is a sort of golden glow around the Drews and their friends, which feels nostalgic. But where Mason finds  that while "adventure is the superstructure, domesticity is the bedrock," I'm still impressed that in this book that predates the latest feminist wave, it is not taken as aberrant but as just assumed that a young woman would want adventure as much as anyone.
Posted by seana graham at 1:06 PM No comments:

Tristan and Iseult at Escape Into Life

I happened to be reading The Romance of Tristan and Iseult and it seemed appropriate on Valentines Day to write about it for Escape Into Life this time around. I'm traveling and using someone else's computer so won't post a picture just now, so just head on over HERE if you're interested.
Posted by seana graham at 9:19 AM No comments:

The Killer Next Door, by Alex Marwood 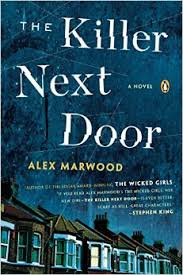 For a certain kind of person there are few things more thrilling than getting free books, and even after years of working in a bookstore where there were galleys galore and now having more books on my shelves than I will ever have time to read, I am still one of those people. Or at least I found this to be the case when as a 2014 Bouchercon attendee I was given a nice canvas bag full of mystery writers' works.

Now, that said, the idea that I will actually get through all these books is more aspirational than likely, particularly as I immediately turned to the work of several authors whose acquaintance I made or whose work was already familiar to me. But I did grab one from the bag pretty fast, because the author was recommended to me by a fellow conference goer.

The Killer Next Door was intriguing enough in the beginning, but I began to be put off by the macabre crime at the heart of the tale. So when I thought I had lost the book in my complicated holiday travels, I wasn't too bothered. I didn't think I would replace it.

However, it suddenly turned up in my house a couple of days later, and guess what? I was happy. I had missed it more than I thought. And as soon as I began to read it again, I saw it in a different light. Essentially, this is a London tale, and as I've said on this blog before, I do love me a good story set in London.

The criminal in the story remains macabre, and he's not the only one. But what the book is really about the neighbors of the criminal, at first their individual somewhat oppressive lives and the way they, slowly, come together. It's really the story of anonymous urban life in any city, and the way that anything can be the sudden catalyst for breaking through the walls.
Posted by seana graham at 8:02 PM No comments: