The Confession by Domenic Stansberry 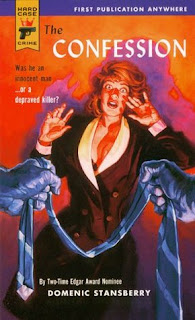 I ran the mystery section in our local indie bookstore for way too many years. By "run" I mean, I did some of the ordering, some of the recommending, some occasional dusting and a lot of the shelving. What I do not mean is that I am any kind of authority on mystery and crime fiction or that it's the only thing I read. However, I do know a lot of author  names. This can be a problem when you go to a big mystery conference like Bouchercon, as I did in New Orleans midmonth. It can be quite awkward to admit how many authors you should have read by now but haven't. I know just about enough to know how much I don't know.

So I recognized Domenic Stansberry's name immediately when I met him in the bar/lounge/lobby area of the Marriott while waiting for a friend, but had to admit that I hadn't read his work. We had an interesting conversation, discovering that we had both been at UCSC in fairly early days there, which can be a kind of recognition factor in itself. Anyway, I resolved to bump his work up to the top of my list, and so picked up a couple of his titles in the almost overwhelming book room at the conference. It was purely by chance, then, that I started with his Edgar award winning The Confession. I did not know it was an award winner at the time, I just saw that it was the right kind of size for the plane ride back.

The Confession was published by Hard Case Crime, an imprint which publishes hard-boiled crime fiction, and the covers of which seek to emulate the lurid covers found on pulp fiction of yesteryear. I say "yesteryear", because I don't know the exact era of such covers, only that they have a nostalgic quality to them. Pretty much everything I know about Hard Case Crime I learned on Peter Rozovsky's Detectives Beyond Borders, and if you're intrigued, here's a list of his posts about the imprint.

Hard Case Crime seems a perfect place for The Confession to have come out, or perhaps it only seems inevitable in retrospect. Although the story is contemporary, more or less, there is a tone to it that could have been from an earlier era--say, that of the novels of Ross MacDonald. In fact, it seems possible that Stansberry deliberately left out clues that would signal its precise historical moment. I am not sure that he ever uses the words "cell phone", for instance, but only phone. With the cover and even the old style font of the book, we are a little outside of our present zeitgeist. On the other hand, geographic place is quite specific in the book,  and perhaps provides clues to readers more astute than I am.

One of my sisters lives in San Rafael, and it was an added pleasure of the book to find the region used for a setting. There are several iconic features of that area which Stansberry uses to good effect. Mt. Tamalpais looms over the whole, its legends and significance revisited several times in the story. The chilling view of San Quentin from the upscale communities around the northern shores of the bay is perfect for the mood, and it is in reality one of those visual contradictions that anyone who takes the ferry from San Francisco to Larkspur Landing must grapple with, whether consciously or not. And then there is the Marin Civic Center, famous as a Frank Lloyd Wright design, but housing the Hall of Justice, not to mention adjoining jail cells burrowed into the hillside.

Apart from the psychological game that Stansberry plays with us, drawing us into a 'did he or  didn't he?' loop, Stansberry is a terrific descriptive writer. I've already mentioned his evocation of setting, but the ruthless dissection of character that Jake Danser evinces could only have come from Stansberry's own powers of observation. Which makes me, you know, think twice about having sat across from him in a bar...

Posted by seana graham at 12:35 PM No comments:

I'm a little behind on posting in general this summer, but I thought I'd at least mention my post about Virginia Woolf's Orlando over at Escape Into Life. This was a reread for me, and one that I got more out of the second time around.