Mist on the Saltings, by Henry Wade

I picked up this 1930s British mystery after seeing it praised on mystery writer Martin Edwards' blog Do You Write Under Your Own Name? recently. I'm a little surprised as I go back to Edwards' posts to see that he hasn't reviewed it directly, but really only mentioned it in admiring aside. Edwards is more than familiar with Wade's work, though, and has even written a piece for him for an encyclopedia of crime edited by Barry Forshaw.

Henry Wade, it turns out, is a pen name. You can understand why Major Sir Henry Aubrey-Fletcher, 6th Baronet CVO DSO may have wanted something shorter to go by on book jackets, even barring other reasons for the pseudonym. Aubrey-Fletcher served in both World Wars, played cricket and found time to be the High Sheriff of Buckinghamshire at one point in his life, but that didn't keep him from writing what by all accounts are some excellent mystery novels.

The story largely takes place in a Norfolk fishing village called Bryde-by-the-Sea. Although a fictional place, I suspect that Bryde is in some part drawn from a similar village called Wells-next-the-Sea. Both names have a touch of irony to them, as neither are actually by or next to the sea at all, but separated from it by a good stretch of silted up land, the "Saltings" of the title. Much of the plot of the story is complicated by the fact of having to get around these parts by means of various boats and ferries, minding the tides as they ebb and flow. There's a map as a frontispiece to help understand the lay of the land, at least in my Harper Perennial edition, although it was more helpful in a general way than on specifics.

The cast of characters include native Norfolk residents, but also a handful of newcomers. Much of the story revolves around the situation of John and Hilary Pansel, who had come to the little community with high hopes of relaunching John's career as an artist a decade or so before, but whose dreams have faded a bit overtime. Dallas Fiennes, a successful novelist, has also come there to work on his latest project, and it is he who manages to drive a wedge between the two. When someone is murdered, as of course someone must be, outsider and native alike are put on the list of suspects.

The novel builds slowly and psychologically, and it occurred to me that for that reason alone it's easy to see that it is not of our era. You have gotten a long way into the book before any murder has occurred. It is both a portrait of a village and a study of a marriage in addition to being a mystery. Another thing that struck me as atypical is that there is a regular hierarchy of policemen on the scene--just when you think you've reached the guy in charge, there is still another someone above him.

In trying to learn a little more about Wade and about the Saltings, I was surprised to come across a piece in tribute to Jacques Barzun, who I know and admire from his encyclopedic work From Dawn to Decadence. Barzun was also a crime novel aficionado and in fact wrote extensively on the genre. As Hugh Van Dusen wrote in a little centennial tribute:

At one lunch I mentioned that I had just read Mist on the Saltings by Henry Wade, which had been published in England in 1933. Jacques proceeded to give me an exact plot summary and a précis of its narrative virtues — a remarkable feat of memory, even for Jacques.

I don't read as many of the Golden Age style mysteries as I once did, but looking at the other authors listed at the back of this edition, I am reminded of how much I enjoyed the high level of intelligence and craft displayed in them. It's nice to revisit the era when they were prevalent now and again.

Posted by seana graham at 4:20 PM No comments:

The Cold Cold Ground--a vindication, and the Europa Challenge blog, 2014 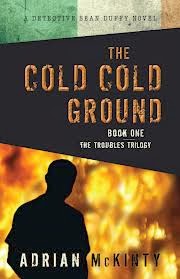 I'm a little behind on posting reviews here--apologies to anyone to whom this might possibly matter. Thought I'd make up for it a bit by linking to the Nancy Pearl "books from the past", where it turns out that someone with a national audience has mentioned one of my favorite books of recent years, Adrian McKinty's The Cold Cold Ground. Here's the review, if it is a review, that I wrote here when it came out.

And here is the interview with Pearl.

Another of her picks, A Long Way From Verona by Jane Gardam, has been recently reprinted by Europa Editions, just in time for you to select if you decide to join us all over at the Europa Challenge blog. Details for 2014 are HERE.

Posted by seana graham at 1:46 PM No comments: 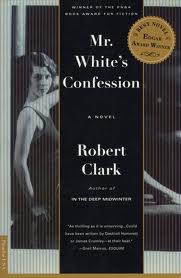 Almost forgot to post that I have a new review up over at Escape Into Life. Check it out. As I mentioned there, I actually got a new perspective on this book when I realized that the epigraph is from St. Augustine's Confessions. Since it's in Latin, I even managed to find a translation of it, and found its reference to memory linked it to Clark's novel in significant ways. But I wasn't able to work in a part slightly ahead of this in the Confessions which I think is even more apropos, so I think I'll post that here:

"Great is the power of memory, a fearful thing, O my God, a deep and boundless manifoldness; and this thing is the mind, and this am I myself. What am I then, O my God? What nature am I? A life various and manifold, and exceeding immense. Behold the plains, and caves, and caverns of my memory, innumerable and innumerably full of innumerable things." (10.17.26)

By the way, this is from an article on the Confessions by James J. O'Donnell, which you can find HERE.

I have to admit that I have never had a lot of interest in reading Augustine, perhaps early influenced by Rebecca West's dislike of him. But I have to admit that his explorations of self and memory in relation to faith and God in the Confessions look quite intriguing.
Posted by seana graham at 1:58 PM 2 comments: 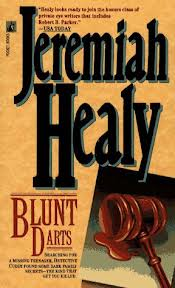 After some other commitments, I'm finally done reading the third of Joe V.'s crime writer recs, Jeremiah Healy, following previous reads of Loren Estleman and Jonathan Valin. It's always hard to know where to start with an established series. In the first two cases, I simply went with what was readily available, but for Healy, I decided to start from the beginning of his Boston based John Francis Cuddy series. I'm not sure that that was the best choice, but at least it gave me the background of the character.

Cuddy is a former insurance investigator who's been forced out of the business after refusing to take part in some shady dealings and decides to go out on his own as a P.I. He has recently lost his wife, and if all that wasn't enough to deal with, he's also a Vietnam vet. It's perhaps a bit much to unpack in a first novel, and I'm curious to see where Healy takes all these elements in future books, but in this one, it mainly amounts to a few graveside visits where Cuddy talks to his wife, a drinking problem, and a bit of a violent streak.

The mystery Healy unravels for us is a good one, involving a missing boy whom nobody but his grandmother seems to care all that much about. It's a tangled tale with enough suspects to make it complicated, though they are all a little black and white. The women in the book, interestingly, seem a bit more complex, and the older women in the story don't let Cuddy off lightly in his assumptions about them. I liked that.

In this novel at least, Healy doesn't show quite the descriptive gifts that Estleman showed in his novel, and of the three male crime writers, it is still Estleman who stands out. But this may still prove to be a case where I caught him at the top of his game and the others at the beginning or end of their writing careers, so I'll have to give them each another try if I find the time. It's been fun to finally delve into familiar names that I never got around to reading at the time that they were perhaps most prominent. It does seem to be another era, writingwise, as in so much else.
Posted by seana graham at 2:40 PM No comments: 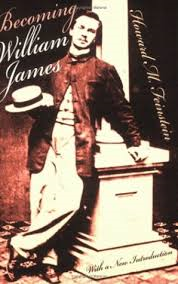 I've been reading this book for a biography website which is in the middle of a re-launch. Although undoubtedly I will be posting a link to that once it's up and going, I don't want to duplicate the review here. Since the guidelines for the website explicitly rule out talk of its personal impact, though, I think it's fair to mention a few things of a more personal nature here.

I was initially interested in this book because of my connection to William James through two UCSC professors, Page Smith and Paul Lee. Early on in my college days, I purchased or was given several of the William James Society's pamphlets or chapbooks, one of which was James's speech, "The Moral Equivalent of War". Long before Chris Hedges wrote his book, War is a Force that Gives Us Meaning, this pamphlet was circulating around Santa Cruz, and influencing people to find their own equivalent peaceful action that would hold the intensity and bonding and high purpose that being comrades in arms brought soldiers in wartime.

The William James Society still exists in Santa Cruz today, and you can find what it's focusing on these days HERE.

Although I can't put up my own review just yet, I did really like this review from Notes on the Cultured Life, which gives a good summing up of the family dynamics that this book is tracing. In any case, Becoming William James is a compelling read, and has a lot to say about Americans and their work identity, particularly when they are struggling to find out exactly what that work is.
Posted by seana graham at 7:25 PM No comments: