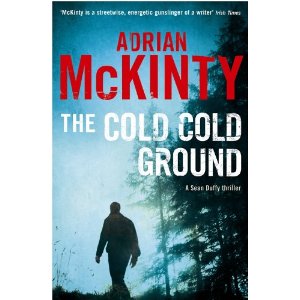 Adrian McKinty's The Cold Cold Ground is coming out in January. Even so, you're not going to be able to buy this in the U.S. just then. If you want it, you can preorder it from BookDepository.com or Serpent's Tail, or, if you must, Amazon.co.uk .

But as of today, you can read a sneak preview of the opening. Go take a look, then come back here. I sense diminishing returns here but never mind--it's fine if you stay over on that excellent blog instead. Feel free to comment. He won't bite. At least, he's in Australia, so if you're on another continent, you're pretty safe...

So did you check it out? I think this opening is trademark McKinty. It's a synecdoche of the book as a whole, and perhaps of McKinty's work in general. You have the  compact poetry of the language, the violence of the scene observed, the casually thrown off cultural references from many levels, the diligent attention to factual detail, the dark humor, and the absolute refusal to bow down before anybody's sacred cows.

I have read the book in manuscript form and if you liked that sample, it only gets better from there. I'll review the book when I actually read it in published form.
Posted by seana graham at 8:11 PM No comments:

Confessions of an Economic Hitman, by John Perkins 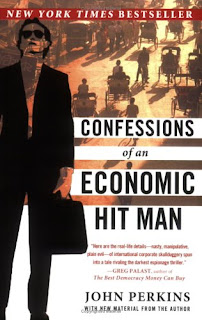 Another one that I've wrapped up recently. I was actually reading this for a project I'm doing. I was expecting it to be a bit more cloak and dagger than it actually is. Basically, Perkins is trying to atone for a career in which by slanting economic data in certain directions, he and the people he worked with were able to convince the right people in various nations of the world that they should throw in there lot with U.S. and corporate interests. Then general effect of these projects seems to have been to build a lot of infrastructure in these countries which the countries in the end couldn't pay for, making them coercible and more amenable to our, and I use that word with a bit of hesitation, agenda.
Perkins met more than a few of the major players during his time in the game, and his talks with people who went against this agenda are valuable in and of themselves. He had a conversation with the popular General Torrijos before he died in a plane crash, as well as a chance encounter with Graham Greene, who was a friend of Torrijos.

I thought Perkins put his thesis together in a readable and accessible way, though I found myself wanting to read a critique of his book, as I'm a bit out of my depth judging it myself. Nevertheless, it does give you a lens to view the world, and some things that I didn't really understand before at least fit into place in this picture.

A couple of things that have struck me since because of this book. First, I was listening to something about Iraq as the U.S. 'wraps things up there' and they were saying something about access to Iraqi oil. Now of  course I've long heard about this idea that we went into Iraq only for the oil, but after reading Perkins book, I suddenly saw something inexorable about this process, and that an eight or nine year war costing thousands of lives and incredible expense is really just a hiccup in this process of attaining access to that oil. I don't even attribute to a U.S. policy or any nation's agenda so much as to a kind of mindless machine, or as Perkins calls it, the "corporatocracy".

I also just happened to watch the beginning of Reilly: Ace of Spies last night and it turned out that Reilly's first mission in Baku, which was part of Russia at the time, but was before and since a major city of Azerbaijan, was really to collect information on oil.

Perkins just happens to be coming to town at the end of this week, and I'm going to do my best to hear what he has to say about present developments.
Posted by seana graham at 12:03 PM No comments: 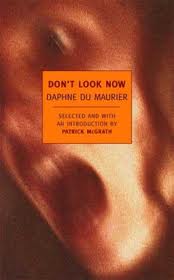 I finished this book a few days ago. It was another one I read for the Good Reads discussion group. We knew of the creepy nature of some of DuMaurier's stories, so thought it would it be a good pick for spooky October. I think we all pretty much enjoyed it. It was a bit longer than some of our other choices, and perhaps a tad more uneven. The first tale in the book, the title piece 'Don't Look Now', was made into a Nicholas Roeg movie that you may have seen--I'll definitely be renting it at some point, as others in the group seemed to have thought it was good and faithful to the story.

Another filmmaker seemed to have diverged a bit more, and not to DuMaurier's liking. Alfred Hitchcock's 'The Birds' was taken from DuMaurier's tale of the same name, but he shifted a few things, including the locale, and perhaps even the larger meaning. It's easy to understand why it might irritate her, but I thought that the deeper tale, which is about our individual helplessness before natural events we are powerless to control, seemed to me to be carried through faithfully. I had the same creepy feeling from both. And Hitchcock, as I learned from a friend, had his reasons for setting it in Northern California. He had read a newsclipping from my very own community, where the birds were mysteriously attacking people. There was a logical reason rather than a supernatural one in this case, though. The birds had conumed an element from a red tide in the bay, which was messing with their tiny little heads.

I found the stories had their strengths and weaknesses. They are definitely of a period and reminded me a lot of certain movies of the forties. There is nothing wrong with that, but some of the stories seem slighter because of that, and read in a row, it can be like watching too many B movies. But DuMaurier's strengths more than compensate. She is excellent on setting, and when she lavishes attention on a character, like the usherette in 'Kiss Me Again, Stranger' she usually nails them.

The introduction to this edition is provided by Patrick McGrath, who is known for writing fiction in the Gothic style himself. I think both McGrath and DuMaurier demonstrate that there is still plenty of room in fiction for this sensibility.
Posted by seana graham at 8:29 PM No comments: