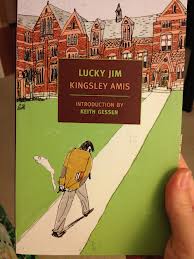 I had an unusual reading experience with this book. I picked it up as part of the New York Review of Books reading group choices over on Good Reads. It was one I'd heard about for a long time, and knew a few people who had found it very funny. Still, I'd never gotten around to it, and decided this would be a good time to check it off the list. The story of a struggling young academic, under the thumb of a dunderheaded old professor and entangled with an older woman whom he doesn't really love or even like very much held up well in some ways, less well in others. Misogynistic is one of those words that was overused at one point and draws suspicion when used now as a result, but let's just say the story isn't kind to women unless they are quite young and very beautiful.

On the other hand, I think most of us can remember being young and struggling to make our way, and so Jim Dixon does make for a kind of Everyman, even if he is not that compassionate toward Everywoman. He isn't the most noble character, and is not intended to be, but most of his pranks are relatively harmless, even if there was one involving insurance policies that I wasn't so sure about. And in the end, perhaps I was convinced that Margaret, the entangler, was more of an emotional vampire than I initially gave her credit for.

I found Keith Gessen's introduction to this edition illuminating, claiming as it did that Lucky Jim was really a combined portrait of Amis and his close friend, the poet Philip Larkin. Originally conceived as a fictional portrait of Larkin, it was Larkin himself who apparently wrote back and suggested that Amis take himself as a model for it--as he was the one with the habit of pulling faces.

My funny experience with the book was that I looked around from the table I sit and have my coffee at in the morning, and there was another copy of Lucky Jim, which was must have been sitting there all along. It was an old battered Penguin paperback that I must have picked up used somewhere, thinking I would get around to it someday. The funny thing was that, as I opened it at random here and there, I was suddenly able to see its funniness and freshness, and perhaps especially its excellent sentences a good deal more clearly. Was it just a matter of reading the lines out of context? Or was it that reading it in a nostalgic old copy, I was now reading it in the right context? I don't know.

At the time of its publication, Gessen says, Larkin had begun to garner some acclaim for his poetry, but Amis had not for his prose. He expressed his frustration in letters to Larkin and it is the kind of frustration that can be empathized with from many angles. Without wanting to give away too much of the plot, it's fair to say that Amis's title is not ironic in the long run. And the solutions to Dixon's problems are of a nature that might seem improbable in a more serious work.

However, it's fair to say that Amis himself, in the writing of the book, fashioned just such an improbable denouement for himself. He wrote the right book at the right moment and his fortune was made. 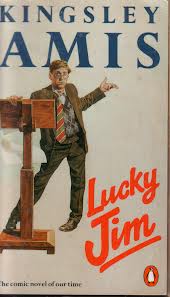 Posted by seana graham at 4:37 PM No comments: