Fortunate the author who finds his material, and recognizes the find when he sees it. As Carlo Lucarelli tells us in an introduction that he includes with all three of these books, he was a student in Bologna writing a thesis on the police in the time of facist Italy, when he encountered a policeman who had lived and worked through the tumultuous years leading up to, through and beyond the second world war. In practice, this meant that he had worked for Mussolini, the partisans, and the nascent Italian Republic. In this man, Lucarelli knew he had the makings of the perfect protagonist to lead us through a very complicated and tragic chapter of Italian history.

When we first meet Comissario De Luca in Carte Blanche, he has just been transferred from the Political Police to the regular police and he plaintively but not entirely effectively must remind people of this fact--Commisario, not Commandante--throughout the novel. In fact, this becomes a recurring theme of the novels. People are always assigning De Luca a title which he is at pains to reject. By the third novel, Via delle Oche, people have moved on to calling him Dottore. I am not a dottore, I am not a dottore, he continues to assert. Out of context, this may sound finicky, but in fact, De Luca must for the sake of his own sanity and survival assert his precise identity. He is a policeman. Is, was, and always will be a policeman. But De Luca also had another identity. For a period of time, he was a Black Shirt, working for the fascist government. And this is the identity that he must at all times conceal. The fear that it will be revealed is the doom hanging over him through all three novels. 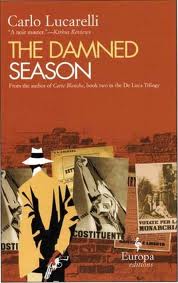 At least from what we can gather from De Luca himself, which we will have to judge based on our own assessment of him, he never took part in the brutal aspects of Mussolini's regime. His job, then and in the novels before us, was to investigate crime and pursue criminals. His honor rests on this assertion. Meanwhile, though, he is pretty much a wreck--he can't eat, he can't sleep, but then almost falls asleep where he stands in broad daylight. In the first novel, another character recognizes that his existential situation is fear.

The crime plots within the books work, and in some degree are connected with the political situtation of the moment. Above all, though, they attest to De Luca's conviction--that above all he is a policeman. He wants to solve crime. It drives him crazy when he can't close a case, or when he is thwarted from doing so by political powers above him. His zealousness takes him beyond his fear, although at crucial points, he is also paralyzed by it. 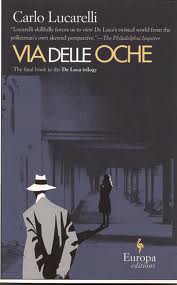 To us, perhaps, the idea that you could wrap yourself in the cloak of your profession and absolve yourself of complicity with corrupt powers may seem absurd. But I remember reading a passage in Rebecca West's Black Lamb and Grey Falcon some years ago, where she describes a man she met in Yugoslavia who for her represented an older ideology, and who  had this same idea of what a profession was. Things that we would find contradictory in one person were not so for him, because he undertook them under completely different roles.

"Excuse me, Maresciallo, but...who do you vote for?" Lucarelli asked his friend at one point, with our own kind of perplexity.

"What does that have to do with it? I'm a policeman."