The Gift of Rain, by Tan Twan Eng 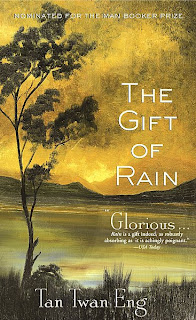 Another book that I read at the behest of my book group, but it was one I had heard some good things about before, so I was looking forward to reading it. Set on the island of Penang, which lies off the west coast of Malaysia and is one of its states, it takes place in the days building up to WWII, and continues through that war's unfolding. The narrator, Philip Hutton, is the scion of a successful British trading company in Penang who has just about the world at his fingertips, but for one thing. Half of his ancestry is Chinese. The only child of  a short second marriage, Philip lives his life on the fringes of his father's already well-established first family, finding it easier to live as a loner than to figure out his place in the familial scheme of things.

With the rest of the family away in England, a trip he wasn't interested in making himself, Philip is left to his own wiles, until one day, an older Japanese man approaches him, asking him for the use of a boat. Thus begins Philip's relationship with Endo-san, his sensei in more than just martial arts. In another culture, he might be termed Philip's guru, the link being a devotional one as well as educational.

Of course, the Pacific War is looming, as we know, but Philip does not, and so, all bets are off.

There is plenty to like about this ambitious first novel, not least the skillful way in which Tan Twan Eng intertwines the plights of at least three cultures, and the extent to which he does this impartially. He also very successfully renders Penang and various other parts of Malaysia, and, as I visited the region for a short time many years ago, there was a nostalgic pull as well. If in some ways the novel is about Philip's quest to find balance between the various elements of his life, the book also helped me balance my own memories of my trip there. And of course it reminded me of what a fascinating place Penang is, with its mix of many cultures somehow co-existing more or less peacefully. Of course, I don't know what it is like now.

There were a few things that I felt to be weaknesses in the overall architecture of the book. I thought that the recounting of that distant time from an era more like the present kept me feeling a little more detached than I would have felt if he had just served up the story cold. Eng created a frame that I am not entirely sure needed to be there.

There is also a heavy dose of belief in past lives that I didn't think quite worked. It's not that it didn't have its place in the story, but I think that some of the plot points depended a little too much on the conviction certain of the characters felt about it.

Finally, I think the end of the war story was just a bit out of sync with the leisurely pace of the beginning of the novel. I can't really say that everyone would have the same reaction--after all, there is a war on, and everything gets racheted up by definition. Still, there was a slight feeling of changing genres.

On balance, though, these quibbles don't count for so much. I found so many things to like about this book, including the two main characters. I think there are probably not many people who actually could have written this novel and we are very lucky that there was a talented writer who was willing to find a way to do it.
Posted by seana graham at 7:27 PM No comments:

The True Deceiver, by Tove Jansson 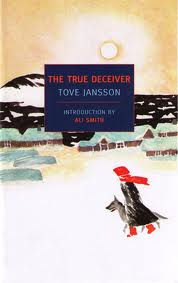 I assume most people come to know Tove Jansson through her Moomintroll books, but for whatever reason, they never came to my attention when I was a child. So my introduction to her was through the New York Review of Books reissue of The Summer Book , which we had a very nice discussion of over at Goodreads awhile ago. And in some ways, I don't think True Deceiver quite meets the mark of The Summer Book, which seems to me a  near perfect thing. But that's not to say that there isn't plenty of treasure to be found in this short novella.

The novella essentially revolves around three characters--well, four if you count the dog, as you probably should: Katri Kling and her younger brother Mats, her nameless German shepherd, and a famous children's book illustrator, Anna Aemelin. As the story opens, Katri is living over a shop with her brother, but she doesn't get on with the shopkeeper, and is looking for a way out of her predicament. When she realizes that there is plenty of room in Anna's big old family home, she finds a way to work herself into Anna's household.

Katri is the kind of prickly personality who doesn't really have friends. She is perhaps too singleminded to want any. I feel that this is a kind of female character that we have seen before--she reminds me a bit of Temple Grandin as played by Claire Danes. Based on what I read about Jansson last time around, it may not be very far off from Jansson herself. At the same time, though, Jansson's own life must figure in Anna Aemelin's as well, as the serious artist who has somehow been overtaken by her childrens book creations. (In the story it's adorable bunnies, painted with flowers).
The more I think about it, the more I think that there's a level to this story that is about different parts of the psyche coming together. There is a way in which all the characters have to incorporate parts of the other, or take the advise of another to move beyond their current state. I found myself particularly intrigued with what Katri offered Anna. Anna is living frozen in time, at least until spring when she can begin to make her intricate study of the forest floor again. Katri helps her get rid of some of her immobilizing past--the weight of the family history--not by sorting through it, but by just taking a whole pile of old furniture out on the ice, ready to sink beneath the surface once the ice melts. Talk about your decluttering.

Anna has also been negligent about her finances, carelessly letting people do her out of her profits. Anna is getting by okay without it, but Katri helps her see that what she is really doing is turning a blind eye to the potentiality that money represents. But in the end, as this seems to be a book about finding balance and perspective, Katri herself wonders if she has gone to far.

This isn't a heartwarming book. It is really the story of how three highly individual people acclimatize themselves to each other, and in some ways, how they don't. It has a lot to say about the life of community, both in the household form and in the larger community sense, and if it's a bit cynical in that regard, well, it is a winter story...

There's a nice piece by novelist Ali Smith on the book, which you can read HERE .

Posted by seana graham at 11:03 PM No comments: 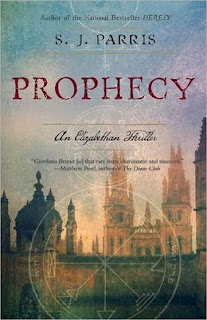 Prophecy is the second in a detective series featuring the historical figure of Giordano Bruno, following Heresy, which I wrote about longer ago than I thought. (Parris writes novels faster than I get around to blogging about them, apparently. The third book, Sacrilege, is already out in paperback.) .

This second book takes Bruno to London, just in time for the Great Conjunction "Year of Our Lord 1583", when two powerful planets, Jupiter and Saturn, are heading for alignment, heralding the death of one age and the beginning of another. While you might think this could mean any number of things, it's all bad news for Queen Elizabeth the First, with prophecies of her downfall and plots from the Continent to make England Catholic again.

Bruno, secretly employed as a spy, finds himself implanted in the French ambassador's court, as do a fair number of other non French people, each with his own agenda. Bruno is also consorting with that Renaissance man Jonathan Dee, who has made himself the queen's astrologer and is also dabbling in dark magic on the side--a very risky hobby. Like Dee, Bruno is continuing on the trail of a lost book that contains the secret of immortality, among other things. Obviously, they aren't the only ones looking for it.

Things start to go bad when one of the queen's maids of honor is found dead. And Bruno of course finds himself at the heart of the investigation.

As with the previous book, I find Bruno an engaging and interesting character, and as also with that book, I would like to have more of his own thought, this 'humanist dangerously ahead of his time" as Publishers Weekly has it. But the story is well crafted and the scholarship of the "author who is S. J. Parris" shows through. I'll be reading Sacrilege as well.
Posted by seana graham at 5:59 PM No comments: