I'm frankly not sure if this is the way to promote this or not. Yesterday our terrific children's book buyer at Bookshop Santa Cruz pressed this new book by Lane Smith upon me and I immediately pressed it upon a couple more of my coworkers. So I thought I'd go on and recommend it here too, thinking I wouldn't have much more to show than the cover image. However, Macmillan has made this cartoon of it available which gives some sense of the substance. Perhaps it undermines the central point, though, which is that a book is a book and not something else. I have to admit that I heard different voices in my head when I read it to myself, and you might want to go that route too. However, I offer you the choice...
Posted by seana graham at 11:20 AM 1 comment: 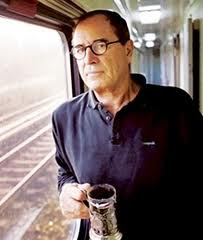 Although I have actually finished a very enjoyable book since my last post (Moonlight Mile, by Dennis Lehane) the fact that it's not only a galley but an uncorrected proof leads me to decide not to quote from it just yet (it's good, though!). Instead, I will revert to my brief posts from other books I'm wending my way through more slowly. Today, it is Paul Theroux's Ghost Train to the Eastern Star, in which he revisits a trip he made some 33 years earlier in The Great Railway Bazaar. I always like Theroux, though he is probably the most curmudgeonly author I've read that still manages to retain my affection. What's great about this book is not only that it's done in the inimitable Theroux style, but it allows him to reflect on half a lifetime of such escapades and their meanings. Here's a brief bit on finding himself riding the Orient-Express--not the  famous Orient-Express we'd expect, but another of the same name on a neighboring track. Of the first he says:

"It was not my train because, one, it was too expensive: it would cost me around $9,000, one way, from Paris to Istanbul. Reason two: Luxury is the enemy of observation, a costly indulgence that induces such a good feeling that you notice nothing. Luxury spoils and infantilizes you and prevents you from knowing the world. That is its purpose, the reason why luxury cruises and the great hotels are full of fatheads who, when they express an opinion, seems as though they are from another planet. It was also my experience that one of the worst aspects of traveling with wealthy people, apart from the fact that the rich never listen, is that they constantly groused about the high cost of living--indeed, the rich usually complained of being poor."
Posted by seana graham at 11:14 PM No comments: 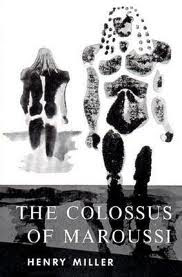 Due both to some assigned reading and my own highly distractable nature, I am in the middle of quite a few books and not at the end of any of them. In the meantime, I thought I'd post an impression or two. Today's comes from Henry Miller's The Colossus of Maroussi.

Perhaps I came to Miller from the wrong angle in the past--namely some passages about him in the diary of Anais Nin--but I have never had a keen desire to read him. So it's somewhat inexplicable that I suddenly decided to pick up this book about his visit to Greece just as the Second World War is about to break everything to pieces. I don't know what I was expecting exactly, but certainly not this piece about his late night stroll in the park during a heat wave on his first night in Athens:

I sauntered slowly through the park towards the Temple of Jupiter. There were little tables along the dusty paths set out in an absent-minded way: couples were sitting there quietly in the dark, talking in low voices, over glasses of water. The glass of water... everywhere I saw the glass of water. It became obsessional. I began to think of water as a new thing, a new vital element of life. Earth, air, fire, water. Right now water had become the cardinal element. Seeing lovers sitting there in the dark drinking water, sitting there in peace and quiet and talking in low tones, gave me a wonderful feeling about the Greek character. The dust, the heat, the poverty, the bareness, the containedness of the people, and the water everywhere in little tumblers standing between the quiet, peaceful couples, gave me the feeling that there was something holy about this place, something nourishing and sustaining.