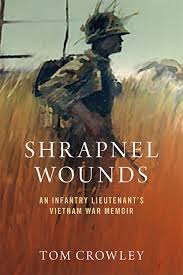 I first made the acquaintance of Tom Crowley as a mystery writer, not a memoirist. He was attending the 2014 Bouchercon in Long Beach and we started up a conversation on that first evening, which ultimately led to my reading the first of his Matt Chance mystery novels, Viper's Tail, which I reviewed here at Not New For Long a while ago. One of the things that I found interesting about that book was how Matt's former life as a soldier came through and affected his choices in the present.

So it was with great interest that I read Crowley's account of his own experience as a 'grunt' in Vietnam. In his forward, Crowley writes about the niche he is trying to fill with this account. He says that there are autobiographies by authentic war heroes,  and there are books by war correspondents, often excellent, but not really reflecting the day to day life of the soldier on the ground. Crowley wanted to speak for the many combat veterans who for the most part haven't really spoken out about their experiences. As Crowley himself found, it is no easy thing to do to revisit traumatic memories long enough to write about them.

Crowley came into the war before our national disillusionment about it had set in, so despite being pressured into service by the looming specter of the draft, he was able to enlist on his own terms. As someone who came of age in the years of protest, it was interesting to me to read of how army life was experienced before the corrosion of trust had set in. Crowley shows  himself to be molded in a particular American grain by resolving early on to do his best, to make the most of it, and even the grueling boot camp days and officer's training he seems to have taken more as a challenge and actually enjoyed. And once given a platoon on the ground in Vietnam, he takes his responsibilities seriously.

Although Crowley claims to be no hero, he does prove himself to be a leader of men, and is conscientious and resourceful in the way he treats the soldiers under him. One short maxim which was passed on to him by a more seasoned soldier as he was about to take up his command was one that I have actually tried to integrate into my own life a little more since reading this book, though admittedly in situations where the stakes aren't anywhere as high. "If you think it, do it." The idea here was that even if you and your troops are bone tired from marching down some trail all day, trying to stay alert for ambushes, if you think to set up a perimeter that can be guarded, you should do even if every bone in your body just wants to rest.

Countering this American resoluteness and ingenuity, though, is a growing sense of how the war is really being played and by whom, and the career military takes some heavy criticism as the book progresses. Decisions are made by higher ups for political reasons that have nothing to do with the troops on the ground but only the generals' long term career aims. Although, Crowley is restrained in his expression of this, it does come through all the same.

I am not normally a student of the history of the Vietnam war, knowing just famous names and battles, the tunnels of Cuchi and other things that are part of our vague cultural associations with the place. So one thing that surprised me was to learn that for the most part, the Vietnam was fought by soldiers who were only there on a one year tour of duty (long enough, obviously, if you were one of the soldiers.) But this set up a dynamic where the North Vietnamese were steadily watching and learning about their opponents, while the Americans were inevitably always learning everything all over again. Although perhaps this doesn't mean the American mission was doomed from the start, it's certainly one scenario that can't help crossing one's mind.

This is a fast, absorbing read even if you aren't a vet or someone passionate about reading war history. It succeeds in interesting us in the life of one foot soldier who perhaps isn't as ordinary as he claims to have been, but nevertheless experienced what many, many young men did in that war and helps us to understand it better.
Posted by seana graham at 5:10 PM No comments: 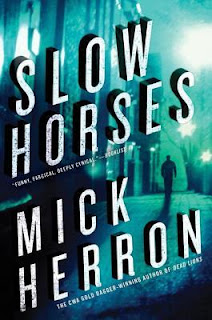 I was intrigued with the premise of this book after reading about it recently on Rob Kitchin's blog, The View from the Blue House. Rob writes admirably concise, fair and nonspoilerish reviews of crime fiction and you should check out his blog if you need some recs, as he covers a wide swath of territory.

"Slow horses" is what the book's  elite spy world calls fellow spies who have been put out to pasture but refuse to quite die. Usually their banishment is due to some screw-up that can't be swept under the carpet. The case of River Cartwright, who leads us into this world, is given as an opening example. Then we're introduced to Slough House, the refuge for these ne'er-do-wells, and the punning source of the failed spies' nickname. Let's  just say the place has no resemblance to MI-5 headquarters and that's putting it mildly.

I like Herron's description of the particular hell that these people, once members of the best and the brightest, find themselves in. Their actual jobs are no more boring than a lot of people's work is, but it's the haunting sense of what could have been but for one slip, one lapse, one indiscretion that makes this a purgatory for them. As in Dante's description of hell, there is no camaraderie, as everyone is both too preoccupied with themselves and too aware of their neighbors' failures to reach out to each other. However, a kidnapping is about to change all that.

The subsequent story is nice and twisty, and although some of the twists can be foreseen once you get the way Herron's plotting works, I still found a few clever surprises. And the author is successful in keeping a large cast of characters distinguishable from each other and giving them all their own story arc and the story unfolds nicely.

As I may have mentioned a time or two before, I do love me a good London novel, and as Slow Horses takes place almost entirely within its environs, it fit the bill for me on that level too.

Slow Horses is the first of a series and I happen to have a galley of the second, Dead Lions, which I'd picked up just because of the Soho imprint.

Lucky me.
Posted by seana graham at 6:22 PM No comments:

A Good Man in Africa at Escape Into Life 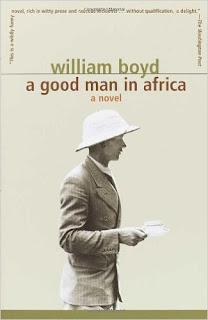 My review of Willam Boyd's first novel, winner of the Whitbread Prize and the Somerset Maugham award, is up at Escape Into Life. Check it out!
Posted by seana graham at 2:11 PM No comments: