In a bit of a departure from reviewing and because despite having a lot of blogs, I don't really have a novel writing blog per se, I am going to use this one to mention a Writer's Digest critique contest that ends tomorrow. If you have a middle grade novel that you would like to get a little bit of an agent's perspective on, check out the "Dear Lucky Agent" contest at http://tinyurl.com/pwbds3q . July 30th is the deadline, and I'm sorry that that doesn't give you a lot of time, but I haven't gotten my entry together yet either, so there's no reason why we can't still pull this off, is there?


All you have to do is submit 150-200 words of your middle grade novel, plus a one sentence logline and then, and this is important, post a link to the contest in two social media sites of your choice. Facebook, Twitter, blogs, whatever. Just make sure and do this step because your brilliant tale will be disqualified at the starting gate if you don't.


Obviously, I'd like to win one of the three winning slots, but even if  I don't, I sure hope you do.
Posted by seana graham at 1:50 PM 3 comments:

Just a quick note to say that my sister Julie now has a book review up at Escape Into Life. Since I'm the book review editor there, some might say this smacks of nepotism. However, as Julie is an MFA candidate at Antioch University, it's all on the up and up. Anyway, check out her piece on Let Me Clear My Throat there, an exploration of all things vocal. 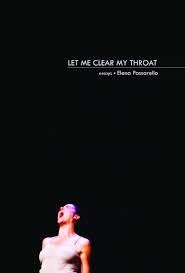 Watcher in the Shadows, by Geoffrey Household 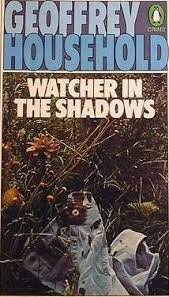 Although regular readers here will know that I read a lot of crime and suspense fiction, I came across Geoffrey Household by an alternate route. I am also a big fan of the New York Review of Books imprint, and at the bookstore where I used to work, I came across a copy of Rogue Male in the  bargain bin a few years ago. Bargain bins, especially book bargain bins, are funny places. In one way, they are the receptacles of the lowest of the low. Books that can't be sold new, can't be returned for credit, the least loved of the unloved. My copy of Rogue Male couldn't even be sold as a used book, and had been reduced still further.

But sometimes bargain bins are the places where you find the best books of all. Books that have fallen out of fashion, or maybe never were in fashion to begin with. With a title like "Rogue Male", and with the picture of a dead and perhaps disintegrating wolf on the cover, this one was perhaps never destined to play well in feminist, animal loving Santa Cruz. Nevertheless, it turned out to be a gripping and intelligent game of cat and mouse which I found well worth my time. 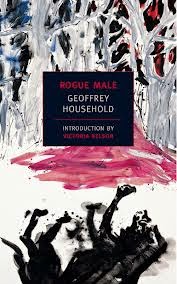 Household's fate as a writer is an interesting one. Apparently he achieved success with Rogue Male, but wasn't able to take advantage of it. He was too busy being an intelligence officer in Rumania from 1939 onwards to rest on his laurels.It wasn't until World War II was over that he was able to begin  writing again, though judging from the long list of his books, he didn't exactly suffer from writer's block.


Watcher in the Shadows came out in 1960, and it is set in the period about ten years after the war. In some ways, it is the same sort of plot as Rogue Male is but with some interesting differences. Psychologically, it's interesting that Household makes his character an Austrian who, while working for British Intelligence, penetrated the Gestapo undercover. As the story opens, he is living in England as a zoologist studying red squirrels. The plot is set in motion by an unknown assailant who apparently wants his head. Charles Demmim is perhaps a bit too modest for his own good, in that he has never gotten around to telling the world that he was not actually working for the Gestapo, but, in fact, against them. This might strain credibility, except for the underlying thread that Dennim still feels far from guiltless about his war years. Continuing on in a very unassuming London life is all right, but there is  no forward motion in it. As one character tells him, he is always looking behind him, never ahead. Although there are very good reasons for him to be looking over his shoulder in this case, that doesn't make this observation untrue in a broader sense as well.

I always admire writers who put time and energy into making their minor characters come to life, particularly in such pure action fare as this. In this book, it is the Melton clan, who live on the shadowy side of the law but have their own kind of values, that he brings warmly to life. In Rogue Male, Household made Asmodeus the cat memorable, and in this one it is a rather spoiled Arabian stallion called Nur Jehan who provides the more comical moments to a not otherwise comical tale.

I found Watcher in the Shadows on a library book sale cart. Household's novels are not much in print now, so if I see any more on my journeys, I will certainly grab them up. You should too.
Posted by seana graham at 2:31 PM No comments:

A Dog About Town by J. F. Englert at Escape into Life and a list of books from the 40s though not by me 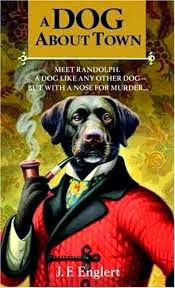 I  put up a post on the first of a mystery series at Escape Into Life before the weekend but haven't had time to mention it here. I feel a bit bad that I have only read the first of J. F. Englert's mysteries featuring Randolph the highly deductive Labrador Retriever, because he's an interesting writer and although these books may be more in the cozy tradition than the thriller mode, they are not cute in the way you might be tempted to think. He deserves a wider audience. Anyway, here's the link to my review of A Dog about Town.

I just happened upon a good list of novels to read from the Forties over at A Commonplace Blog, which is written by D.G. Myers. I have read a few of the books mentioned and more than a few of the authors, but definitely not all. I like lists, in the sense that I like other people to do all the hard work of compiling them so that I can profit from them. Never say never, but I think it's fairly safe to assume that you will not be finding me going to all that much effort here. However, I am usually just about industrious to post a link...

Posted by seana graham at 7:44 PM No comments: