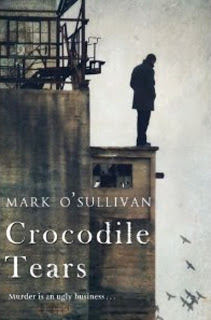 I got a bit depressed the other day when I read an article about the decline of the paperback over at Slate. True, the article basically says that things may not be as grim as all that, but the gradual or not so gradual trend away from paperbacks in favor of ebooks seems to be unstoppable. Maybe it's the right moment to put in a good word for paperbacks, then. Mark O'Sullivan's Crocodile Tears seems an excellent book to use as an example.

I happened to win my copy of Crocodile Tears, but that didn't create much of a bias, as I had already been interested in it and was planning to send off for a copy of it anyway. Its appearance in my mailbox came as a pleasant surprise.

I recently listened to an agent's podcast about what hooks a reader--what gives a reader a feeling of solidity about a book and assures him or her that they are in for a good read. I thought at once of Crocodile Tears, because more than just having a good cover, which it does, or jacket blurbs, which, oddly, it doesn't, the book itself has a reassuring solidity--you feel that the publisher took some time in thinking the design of the book through, and that some care went  into the project. So even before you begin reading the text, you have that sense the agent mentioned of being in capable hands and off for a good ride.

Crocodile Tears is a crime novel set in Dublin. It shares some characteristics with the work of another Dublin writer, Declan Hughes, in its portrayal of the decline and ruin of a  privileged Irish family, complete with great house and troubled past. It also bears some similarity to the fiction of Alan Glynn and Declan Burke, who have both written crime novels set in Ireland of the  contemporary era, which is to say, post boom.

At heart, though, this is a police procedural, with the typical police team dealing with various crimes that emerge out of the first death. Its main protagonist is Detective Inspector Leo Woods (and one small gripe I had about the book was that this ponderous title was used in so many instances where "Leo", or "Woods", or "DI Woods" would have done just fine), and he is a sad and complicated man. Suffering from Bell's Palsy, which paralyzes and distorts one side of his face, Leo is portrayed as in some ways beyond help for his personal afflictions, which are spiritual and psychological as well as physical. As readers, or at least as this reader, we are never quite persuaded that he is as far beyond the pale as he thinks he is, which perhaps opens up material for future books. All of the police are in fact captured midstory--Detective Sergeant Helen Troy, who has just recently been promoted to this new position but is carrying a lot of  familial baggage with her; Superintendent Aoenghus Heaphy, who has undergone a painful and cosmetic enhancement under the impression that it will help him rise; the super capable but preoccupied Detective Garda Ben Murphy, and so on. These are the kinds of characters that will only get better if the series continues.

The story is satisfyingly complex, and takes us not only into the rarified heights of wealthy neighborhoods, but to failed housing estates and abandoned hotels as well. O'Sullivan sets his tale during a record cold spell, which only adds to the bleak atmosphere he is creating.
Posted by seana graham at 1:56 PM No comments:

We Are All Completely Beside Ourselves, by Karen Joy Fowler

We Are All Completely Beside Ourselves by Karen Joy Fowler
My rating: 5 of 5 stars

I read this in advanced reading copy form, with no blurbs or other info, based solely on my regard for the author's previous writing. If you can come to the book in anything like the same kind of way, I urge you to do so. What I can tell you is that it is the story of a family with some missing players, told in the distinctive voice of Rosemary Cooke, who is one of its members. It's an odd family, but no odder in many respects than, say, the one Arthur Phillips writes of in The Tragedy of Arthur, which I happened to be reading concurrently.

This is a novel that carries you along in what may seem at first to be a lighter fashion, but it will take you to some very deep places. Read it.

(I originally wrote that short review for Goodreads, slightly frustrated by my inability to say more without giving anything away. I have since listened to this terrific discussion between Fowler and Rick Kleffel of The Agony column, and was really impressed by their ability to get into the story structure without revealing plot spoilers. The link is here. )
Posted by seana graham at 1:10 PM No comments:

Midnight in Peking, by Paul French

I posted a review of this book on Good Reads awhile ago, before it won the Edgar for Best Fact Crime this year. Somehow I neglected to put anything about the book here.

It's an odd coincidence that this book forms such a perfect companion piece to Erik Larson's In the Garden of Beasts. Although I'm sure the publishers recognized a good popular history when they saw one, French tells us in the end how he came upon this tale, and I think it was the fact that it was an intriguing story more than any immediate sense of commercial possibilities that drove him on.

Both books are set in roughly the same period, this one beginning in 1937, Garden of Beasts in 1933. Both feature families of one culture thrown into another one on the verge of war, and both are particularly about the father and daughter of that family.

There, of course, the similarity stops. Germany and China are not much alike, and the personalities of the father/daughter pairs are not all that much alike either. But the device proves very flexible as a way of telling one family story and opening it up to render the society at large in a particular decisive and now lost moment.

As you read all the way through to the author's notes at the very end, you will realize how extraordinary it is that we have the story of what happened at all. It is down to a father's determination--though the fox spirits may have helped just a little.