I Hear the Sirens in the Street, by Adrian McKinty 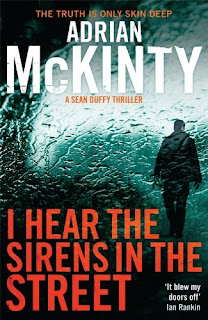 I'm a little tardy in getting a post out about this novel by British standards, and a little early by American standards. The truth is, I read this book in an earlier prepublished form and it's taken me a while to buy and get to the official version. Anyway, as a bridge between English and American editions, I'm probably roughly in the right place, though wholly by accident, which is typical.

I've written quite a few posts now about McKinty's books, as you can see HERE. But what I thought I'd talk about in relation to I Hear the Sirens in the Street is something that I don't find commented on in better reviews than my own. Here's an example of one such (be careful, though, as its a bit spoiler heavy). Yes, we can all see the descriptive accuracy, the lyric gift, the deep themes of revenge, the very occasional heart-stopping violence. I think I've even mentioned that they are often very funny, in that dry Northern Irish sort of way.

But I think that one thing few reviewers have made enough of is their quality of delight. If I say they are delightful, you'll think I mean that they are charming and sweet and cozy, which would definitely be giving the wrong impression. What I mean, though, is that the language itself consistently gives your brain a delicious little dose of something that it wasn't expecting. It's not in the plotting, it's not in the jokes, it's not in the casually thrown in erudition--or not alone in them. It's the sensibility behind the story that provides it.

With "The Troubles" trilogy (which is so far just "The Troubles" duo) it's been interesting to see that some reviewers favor the first over the second, and some the second over the first. Personally, I think this is probably like asking, which Game of Thrones (technically, A Song of Fire and Ice) novel did you prefer? It's one story, people! Two crimes, sure, but basically, one story of  guy who finds himself in a Northern Ireland whose hopes and dreams are fading fast, on the outside of more things than he's on the inside of--and yes, you can take that as saltily as you want to--smart enough to know it makes sense to leave, and still--not leaving. Not permanently. Not yet.

In the meantime, though, Sean Duffy is islandbound. He starts out on a routine police investigation and is immediately shot at by an aged security guard. Things don't really get better...

The security guard had taken the time to reload and was determined to have more fun.
“Stop shooting!” McCrabban demanded again.
“Get out of here!” a voice replied. “I’ve had enough of you hoodlums!”
It was a venerable voice, from another Ireland, from the 30's or even earlier, but age gave it no weight or assurance - only a frail, impatient, dangerous doubt.
This, every copper knew, was how it would end, not fighting the good fight but in a random bombing or a police chase gone wrong or shot by a half senile security guard in a derelict factory in north Belfast. It was April 1st. Not a good day to die.
“We’re the police!” McCrabban insisted.
“The what?”
“The police!”
“I’ll call the police!”
“We are the police!”
“You are?”
I lit a cigarette, sat down and leaned against the outer shell of the big turbine.
You can actually read tons of the beginning of the novel on McKinty's blog--that is, if you're the mistrusting sort who isn't going to take my word for the thing. Go on ahead--I'll never know.

Posted by seana graham at 9:01 PM No comments:

Jay Hartman of Untreed Reads recently put out the call to Untreed writers, asking if they'd like to contribute a blog post for March ebook week. As someone who works in a bookstore, I've had a lot of thoughts about all this over the years, so I thought this was a good time to write them up. You can find what I came up with HERE .

I've been reading through the other posts there and its proving quite a good forum on the subject of digital vs. print. Several of the other writers have experience of both print and epublication and it's interesting to get their take on the rapidly changing world of publishing.

March also happens to be the third anniversary of Untreed Reads, so they've decided to feature author blog posts all month. Do check them out.

Posted by seana graham at 12:00 PM No comments: