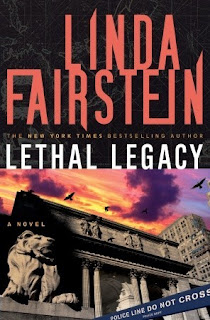 It's been awhile since I've read one of Linda Fairstein's crime fiction series featuring Assistant District Attorney Alexandra Cooper and  her pals Detectives Mike Chapman and Mercer Wallace. A reference to another book set in the New York Public Library led me to wonder if Fairstein had ever written one with that setting, and much to my delight, I found that not only had she, but I actually had one sitting unread on my shelf!

Fairstein, who was the head of the sex crimes unit for the Manhattan district attorney, made good use of her experience working with victims of sexual assault in her earliest books, educating readers on victims' rights in a variety of ways. That said, her real strengths as a crime writer lay elsewhere, I think. It was a few books along that she hit on her winning strategy of setting her crimes in the actual buildings, monuments and institutions of New York, and I believe the real reason I've kept reading along is for her terrific research into places we may have heard of--though sometimes not--but never knew that much about. The iconic New York Public Library was an obvious choice for her to get around to at some point.

Alex Cooper's life outside the world of crime may seem to be a little too good to be true, except that judging from the evidence it's modeled to some extent on Fairstein's own life, in which she was married to a prestigious Manhattan attorney and has a home in Martha's Vineyard just as her protagonist does. It always strikes me a little odd, then, that her descriptions of this rarified world are often are the flattest parts of her books. For me at least, it's very hard to care about her latest romantic involvement with the Frenchman Luc something or other, and as he has a very small role in this long book, perhaps Fairstein found it a little hard to care about him too.

The passionate heart of the books always lie with the trio of Coop, Chapman and Mercer, and with Mike Chapman in particular. In Chapman I think Fairstein really created a character that leaps off the page. He is a salty, often obnoxious, and definitely not politically correct sort of guy, but his sterling qualities cannot be hidden by his banter. Unlike her old and good friends outside the law, whose virtues are frequently articulated by Alex, she doesn't have to tell us about Mike's virtues, because we feel them. The connection between Mike and Alex feels real and contains elements of attraction, and he expresses his admiration for her by frequently mocking her, which she never mistakes as malice. Nor do we.

This book contains much lore about the library, as well as the world of rare book collectors and the equally covetous world of map aficionados. It perhaps goes on a little too long, particularly if you don't care about any of that stuff. And perhaps you shouldn't read Fairstein if you can't warm to a story that provides a lot of factoids for their own sake. For me, though, and for a lot of other people apparently, given her bestseller status, her gimmick really works.
Posted by seana graham at 3:59 PM No comments:

Shenzhen: a Travelogue from China by Guy Delisle 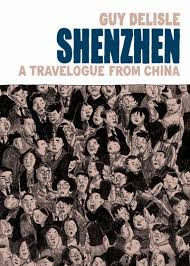 I first got on to Guy Delisle when I read a blog post of Adrian McKinty's recommending another book of his called Burma Chronicles. I went on to read the book. I'd forgotten this, but apparently, I liked it well enough that I went on to write a review myself.

This year, I made it to the National Free Comic Book Day, the one day of the year when I become something of a comic book maniac, thanks to the generous support of the day by two great local comic book stores, Comicopolis and Atlantis Fantasy World. And I like to buy something just as a thanks for the free fun stuff. So this year, one of the graphic novels I bought was another Guy DeLisle book about Shenzhen, a major financial center in Southern China, just north of Hong Kong. Close in geographical distance, but separated by differing histories, as Hong Kong lay under British rule and influence for a century and a half.

Delisle didn't make light of some of the repressive aspects of Burma, or Myanmar, as it's now called. But as he was there with his wife and young child, there was a different quality to his life than there is in this one, where he is visiting for a short period of time to oversee outsourced Chinese animation for a French company.

Looking at various Good Reads reviews just now, I see that people were less enchanted with this book than they were with Burma Chronicles, as Delisle doesn't really take to Shenzhen. But I found it a very interesting portrait of a traveler's isolation and alienation in a country where he doesn't speak the language and contacts with people he can talk to are few and far between. Weekend visits to Hong Kong and even Canton are different experiences, but Delisle is constantly frustrated in his attempts to visit the countryside, not by the powers that be, but by his inability to catch the right bus or find the right bike route to do this. The book records an experience of Shenzhen circa 1997, and nearly twenty years may have made a difference as far as accessibility for foreigners goes. But in that year, it seems to be a busy, rather somber and functional place. The dark palette he uses to show it is quite different from the more sunny one he used in Burma Chronicles.

Even here, though, Delisle comes across some quite touching displays of human compassion and interest in him, and despite a certain despondency he is unable to conquer, he is quick to record the human side of the city as well.

I'll read more Delisle, though will perhaps pace myself a little before I take on, say, Pyongyang: a Journey in North Korea... 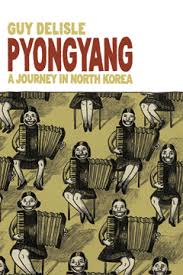 Posted by seana graham at 5:21 PM No comments:

Age of Blight by Christine Ong Muslim at Escape Into Life

My review of Age of Blight: Stories by Christine Ong Muslim was posted today over at Escape Into Life. We've featured some of her stories there before if you want a sample of her writing, though they are not part of this collection. These are disquieting tales about the past and the future and maybe some other reality entirely. When I say 'disquieting', I mean that in a good way. Check it out. 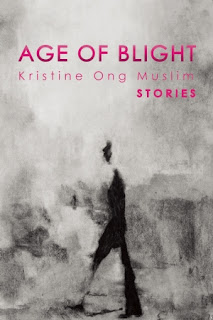 Dying for a Taste by Leslie Karst 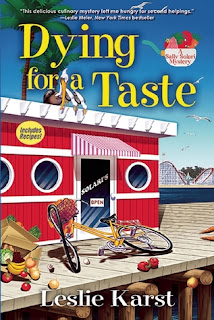 I count a fair number of mystery writers among my friends and acquaintances by now, most of whom I've originally discovered through their connection to the mystery and crime writing world. But my friendship with Leslie Karst long predates her writing a mystery novel, though probably not before her aspirations to be a writer blossomed.

So it's with an almost family kind of pride that I've watched her journey through writing a manuscript, getting an agent, and finding a publisher. Dying for a Taste was published last month and a couple of weekends ago I attended a very fun book signing at the local wine bar Soif, a fitting venue for a food centered mystery.

Sally Solari is a retired lawyer who has found herself back in the family's Italian restaurant on Santa Cruz's wharf. She's formed a close friendship with her Aunt Letta, who has otherwise moved away from the family and opened a restaurant of her own, Gauguin, which serves a more innovative menu than the traditional Solari's.

But the opening pages of the novel reveal that Aunt Letta has been stabbed to death in her own restaurant, and her head chef is the prime suspect. Sally can't believe this of Javier, who was more like an adopted son to Letta than an employee, and soon finds herself involved in trying to prove him innocent.

Over the course of the novel, Sally discovers that the aunt she thought she knew so well hadn't shared many aspects of her past with her niece. Turns out there are plenty of other suspects that might let Javier off the hook.

In an interview Karst did with our local paper, the Santa Cruz Sentinel, she refers to the book as a "snarky cozy", describing it in the traditional cozy vein "but it's a little edgy." It is also a culinary mystery, finishing off with some recipes referred to in the book. At her signing, Karst mentioned that even the more casually described instances of cooking are recipes you can follow to create the items she mentions. As she holds a degree in culinary arts in addition to her law degree, I think you can take her word on that, and as someone who dined on some of her fine meals, I definitely think you should.

One of the most appealing aspects of the book for me was the way Karst nails the Santa Cruz setting, not only with many lovely descriptions of the actual environs here on the Central Coast, but also the complex dynamics of the town. Like Karst I came to college to go to the university here, and like so many others, we never really left. But beyond the university and the more liberal aspects of the town, there has always been an older layer, and Karst nicely captures the longstanding Italian-American community here, whose  hard work in the fishing and canning industries  long predates the coming of the university. And "Keep Santa Cruz Weird" is not the credo of all it's citizens.

Dynamics around food issues and animal activism also play a role, and in general the novel provides a nice snapshot of our cultural moment, at least as it plays out on the Left Coast.

I thoroughly enjoyed this satisfying tale, and look forward to the next, which is already in the works. Now all I have to do is find someone to cook those recipes for me...
Posted by seana graham at 1:55 PM No comments: