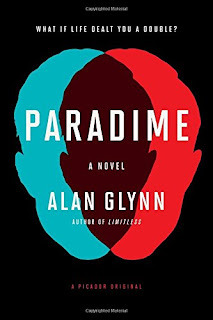 I am sure Declan Burke is right about "the recurring theme of paranoid conspiracy that has run like a seam through Alan Glynn’s work" and I will direct you to his excellent review of Paradime for a more nuanced look at the book and Glynn's work as a whole than I will attempt to give here. But what struck me in particular was its relationship to The Dark Fields, which was published here as Limitless and spawned both a movie and the recent TV series of the same name. I was surprised to learn or perhaps remember that The Dark Fields is actually an earlier work and the three books of the Globalization Trilogy (Winterland, Bloodland, and Graveland--read them) were written in between it and Paradime. This is because the protagonists of both The Dark Fields and Paradime seem to be kindred spirits.

Paradime is not a reworking of the earlier story. Danny Lynch faces a different situation than Eddie Spinola. Spinola's catalyst for self-exploration was a performance enhancing drug, while Lynch's is having a chance to 'become' his doppelgänger. What is similar and striking, though, are both the conditions from which these characters emerge and those to which they aspire. Both  books tell of modern day rites of passage for men who for reasons both personal and political have previously failed to complete them.

In his review of The Dark Fields, Burke describes Eddie Spinola as someone who goes from being a "dysfunctional bottom-feeder to master of the financial universe in just a few months." This holds equally true for Danny Lynch. Both novels are set largely in New York City, which Glynn, an Irishman, had the opportunity to observe for a period of several years. Perhaps as a non-native, he can view Gotham with greater perspicacity, while we Americans simply take its way of operating for granted. In any case, things have grown grimmer since The Dark Fields--the kind of bottom feeding available to Danny is even less nourishing than it was for  Eddie. While Eddie worked in a nongratifying area of copyediting, Danny is suffering from PTSD and, on the outs with the very dicey Gideon Logisitics, he's very soon going to have no money at all. Both men respond to a siren call and quickly find themselves alone in extremely dubious moral circumstances.

What's interesting to me is  not so much that both men fall for the lure, but that they fall for it so easily. At the start of their stories, they are already on shaky moral ground. What they lack most specifically, I think, is any real capacity for discernment. I'm not someone who'd be likely to sing "Give Me That Old Time Religion" or promote a return to family values, but these are essentially deracinated young men, more than ripe for any suggestion that seems to give them access to the powerful world they see all around them but have  almost no hope of gaining. One of the more disturbing things about these books is that neither Danny or Eddie seem all that unusual. In fact either one might be a kind of everyman of our times.

My review of The Dark Fields is HERE. I seem to have had more to say about it than I remembered.
Posted by seana graham at 4:57 PM No comments:

I'm still wending my way through different discoveries from Bouchercon in New Orleans this year and probably will be for awhile, though not single-mindedly. Some of the authors I'm planning to read I've never heard of, but some of them I've known about for a long time and just never gotten around to.

Harlan Coben is one of the latter. One of my friends got on to him quite early, but this didn't kick his work up the list for me. His protagonist, Myron Bolitar, being a sports agent was not quite the draw for me as for my friend, since I'm not that into sports, though when I come to think of it, I tend to actually like stories about sports. And maybe the original cover of as Coben himself humorously termed it, a 'bleeding football" didn't help. 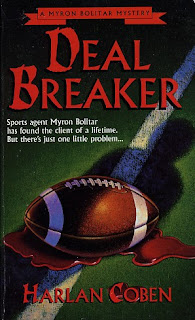 On the other hand, it was a distinctive image, in retrospect memorable and these days it's collectible, baby.

So what was the reason I finally decided to read Deal Breaker? It was on account of the engaging persona of the author. Named a guest of honor at this year's Bouchercon, he was interviewed as the conference opened by none other than Michael Connelly. (Don't worry, Connelly was himself interviewed at the Long Beach conference a couple of years ago.) Lot's of good stuff from both men. One of my favorite moments was when the discussion was opened up to the public and someone said something like, "I know what we get out of you being here, but what do you get out of it?" There was a weighted silence and then Coben burst out: "Are you kidding?" And then went on to say how much readers mean to writers.

I caught a glimpse of Coben at various times during the conference, including on a couple of floats, and if he wasn't having a grand old time, well, you could have fooled me.

Deal Breaker is about the sea of troubles that surround a big fish quarterback that Myron is just about to land. Though this is the first book in the series, we are meeting Myron after several big things have already happened to him--he's been a basketball star, been felled by a sports injury and already lost what seems to have been his true love. The back story emerges naturally, almost as though we should somehow already know it. Maybe there was an earlier book that never made its way into print--maybe not. It doesn't really matter.

Deal Breaker definitely walks down some mean streets-- rape, gangsters and prostitution all feature. But Myron is a funny guy, and there is plenty of comedy to balance out the dark spots. If anything, he maybe maintains his equanimity too well in the face of danger--though he's got nothing on his sociopathic sidekick Win. Though  I think Win adds an interesting element to the story, his feats on behalf of his friend do tend to pull the story out of the realm of strictly realistic fiction. But all in all, this is a good thing--we find ourselves in the world of Myron Bolitar, and  it's  definitely a place to which we want to return.
Posted by seana graham at 2:57 PM 2 comments: