I'm part of the one percent!

Okay--before you get your class hackles up, I am not (by any stretch of the imagination) a billionaire. This a different one percent. I received an email from Goodreads today, which tells me I am in the top one percent of reviewers there. This, I am absolutely certain, is a quantity rather than quality measurement, but we take what praise we can get, right? I was a bit surprised to be in this percentile, as it seems that a lot of people I am friends with over there have written a great deal more. But I assume they will all have gotten the same email. Or maybe even one that says they are in the top .5 percent or something.

Apparently, I've written 227 reviews there since I started blathering on there in August of 2008. Goodreads itself is heading toward it's fifty millionth review, so as you can see, my contribution is very small potatoes.

Goodreads also included the review I've written that has gotten the most interest. Was it for one of the many excellent mysteries I've read since signing up there? No. Was it for some lost classic that one of the several book groups I'm in have turned me on to? Nope, wrong again.

It's for Point Blank, book 2 of Anthony Horowitz's Alex Rider  series. Here is the review in its entirety.


Posted by seana graham at 2:45 PM No comments:

The Possessed: Adventures With Russian Books and the People Who Read Them, by Elif Batuman, at Escape Into Life 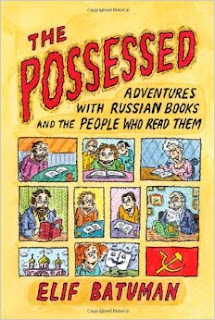 I've got a post up at Escape Into Life today. It's about Elif Batuman, a Turkish-American writer who developed an unexpected passion for Russian language and literature. I wrote a bit about her reflections on this passion, but there is much more that I left out of her astute analysis of different Russian writers. The last chapter on the original The Possessed (i.e., Dostoevsky's) is particularly insightful and illustrates her idea of how books inform life and life informs our understanding of them. I've also found some cool links about Batuman's work elsewhere, which you should definitely check out, whether or not you bother to read my review.
Posted by seana graham at 6:36 PM 2 comments: