The Black Spider at EIL--and All Hallow's Read 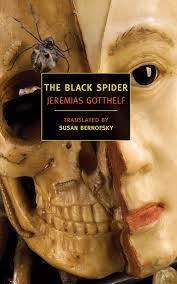 My review of this 19th century arachnophobe's nightmare is up at Escape Into Life now, just in time for Halloween.

And speaking of Halloween, don't forget to participate in All Hallow's Read.


Here's Neil Gaiman explaining how incredibly simple it is.

Posted by seana graham at 11:00 AM No comments:

Free crime writing workshop from some of Ireland's finest

I caught this on Rob Kitchin's blog last night. Ken Bruen, Declan Hughes, Niamh O'Connor and Jane Casey are offering a free web TV workshop on October 30th. I'm a big fan of Bruen and Hughes, and though I haven't read the rest of the quartet yet, I've heard their names mentioned enough in the crime writing world that I'm sure they will be great to hear from too.

As I write a lot about  various crime novels here, I thought there might be at least one or two people who'd be interested in trying this. I'm going to give it a shot even if I'm mostly a crime fiction reader, not a writer. The only catch for me is that, as a Californian, this conference is going to be taking place at about two in the morning. Still, it seems like kind of a once in a life time opportunity. So check it out.
Posted by seana graham at 5:57 PM No comments: 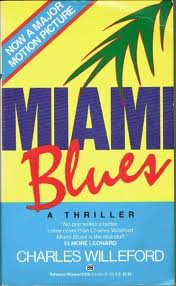 Charles Willeford and, in particular, Miami Blues seem to be making the rounds of that small portion of the crime writing world I frequent and Adrian McKinty's review of this first book in the Hoke Moseley series has called forth a lot of reminiscences from other readers. I had for some reason started with the second book in the series, New Hope For the Dead, when the paperback first came out in these eye-catching yellow covers many years ago, and liked it a lot, though perhaps more for Moseley's trying to adapt to the new reality of daughters foisted upon him than for anything strictly related to crime solving.

As I recall, I read the next book in the series, Sideswipe, and was put off by some violent event that occurred, I'm not sure what. In any case, I never got to the first one.

In this first book, I'd say that Moseley is more or less a work in progress, while the character who proves most interesting is the villain of the piece, Freddy Frenger. "Fredrick J. Frenger, Jr., a blithe psychopath from California", as the first sentence tells us, seems to have pre-dated the sort of actors that I can see playing him now--a Leonardo DiCaprio or a Brad Pitt. Charming and without any scruples involving others whatsoever, Frenger lands in Miami and causes a death right away. Freddy assumes from the get go that his release from prison will be a temporary sort of thing, which makes some sense out of the improvisational nature of his jaunt through the greater Miami area. Along the way, he becomes entangled with Susan Waggoner, a prostitute and naïf who is a transplant to Miami herself. Frenger quickly inveigles her into what he calls a "platonic marriage" in which he is by turns kind and cruel. Willeford somehow manages to make Frenger attractive as a character even though he is not, well, a nice person. To say the least.

The novel is both casually misogynistic and homophobic, and, as with many other books of the era written by men, it's hard to tell whether this is a portrait of the protagonist and his buddies or attitude of the author himself. Suffice to say, if you are going to derive the pleasures the book offers, you'll just have to put up with it. If you're a woman, you've no doubt done it before.

One thing I do want  to take issue with, though, is the constant description of Susan as dim-witted. By random coincidence, I have just recently read The Stranger for the first time, and in fact it is the subject of my last post. I find Susan Waggoner and Meursault, the protagonist of The Stranger, to be remarkably similar characters, but Meursault is praised for  his qualities of openness, honesty and transparency, while Susan is called dim-witted for similar actions and attitudes. Meursault is the hero of his own story, while Susan is portrayed as simply the foil in another person's trajectory. Both are incredibly naïve, but only one is shown as stupid because of this, and I don't think I'm wrong in thinking that gender has some small part to play in this.

Not that I'm equating the two works as a whole. The Stranger is a masterpiece and Miami Blues simply an enjoyable comic tale. But I think even Camus would have to defer to Susan Waggoner (and Willeford) when it comes to vinegar pie. 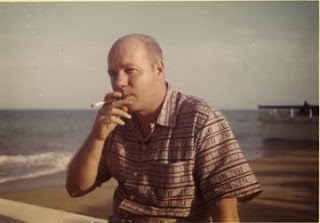 Posted by seana graham at 1:01 PM No comments:

The Stranger--a paradox, and perhaps a dissenting opinion 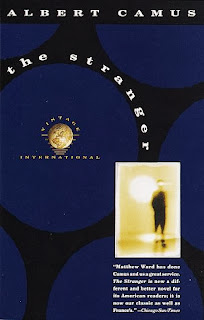 I am determined to get up this post about my last book group meeting before I attend my next book group meeting, even though that is only a few days away, because I was very struck by this odd effect that Camus's famous novel about "the stranger", or "the outsider" had. Perhaps the best translation from the French  L'Étranger  is really "the estranged one". So it is very interesting that this tale of a person who is in some ways estranged from society should have been the catalyst of one our most enthusiastic, connected and communal discussions. Not only did everyone show up, but even a member who no longer lives in town showed up, and unlike many meetings where we talk a little about the book and a lot about everything else, the story of Meursault in the aftermath of his mother's death brought forth discussion right away and the conversation didn't let up for a long time. I found myself wondering what it was about this isolated figure that brought about such, well, solidarity?


I didn't ever read The Stranger in school, so this was a fresh run for me. I am glad I didn't have to tie the book into Existentialism or hear prevailing theories as I tried to come up with some new theory for a paper or exam. My take on the story seems to be a bit different from what others have said it is supposed to be about. I found it not at all odd that a son would walk around in a state of numbness after his mother's death, and though his having put her away in a home with other people because of financial exigencies might have shocked French-Algerian culture of the time, it certainly would raise no eyebrows in American society today. It would seem, on the contrary, he did the best he could for her.

My own experience of the death of people close to me has several times been like that of Meursault in the sense that there is a slightly unreal, out of body experience in the face of the actuality of death, and also a kind of taking stock of one's own physical reality. There is a glimpse of our own eventual dismemberment and so we look at ourselves to see if we are in fact all there. I found that after Meursault went home, he was doing much the same thing, testing the "reality" of reality--the job, a sexual encounter, and so on. I didn't actually take it to be his ordinary state and thought that if Camus had wanted to describe a very disassociated young man who just goes on about life like that normally, he wouldn't have thrown in the death of the mother at the very beginning. Significantly, we don't really know Meursault's relation with this woman, as, by the time we meet him, she is already dead. The things I have read about the book suggest that Meursault is just very honest and he is reacting against conventional response, but in fact, his response to his mother's illness is very conventional--he doesn't abandon her, he finds the best place can for her in the circumstance, and one which apparently gives her some late life happiness.

One of my group members responded to my associating to my own mother's death with the statement that she hadn't really been grief-stricken at her mother's passing. We didn't get to continue with this, but much later, I remember thinking that part of the whole point of The Stranger is that it doesn't actually matter what you feel. The death of a mother is a stage in the human journey, and it isn't so much about what you do with it as the fact that, unless you die first, you must undergo it.

I had the temerity, perhaps under the influence of wine, to read the final passages of the first part of the book aloud to the group. The plus side of this was that one member, who is a nurse and a Buddhist, said, "oh--it's a birth experience." We all came around to this perspective, more or less.

Though other reviews have praised for his impeccable honesty, to my mind,  he is crucially lacking in the quality of empathy. Intellectual honesty actually means little in relation to this. Meursault does wake up from the daze of being into questions of life and death, but I'm not sure he ever awakens  to what it means to be a human being--that is, someone conscious of the fact that they co-inhabit the world with other living creatures, and have a responsibility to others as well as to themselves.

The moment that continues to stick with me is that of the shooting that lands Meursault in prison. When reviews talk about Meursault as 'an ordinary man', I tend to agree that most of us can imagine getting caught up in a moment when he or she could shoot or at least harm someone else, especially if there is some provocation. But for me there is a crucial difference between that first, reactionary shot, and then the four more that, after a pause, followed.
Posted by seana graham at 6:51 PM No comments: