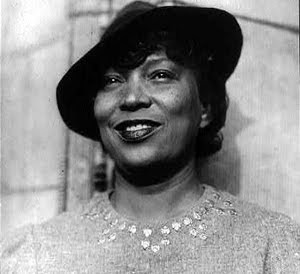 Although even to me it seems as though I'm bouncing back and forth between Irish crime authors, To Kill a Mockingbird and Zora Neale Hurston, I'm not going to break the trend just yet. Thanks to the new blog from the Library of America, I've learned about this very nice  release of some of her field work films. It's implied rather than stated that this is her voice, but having heard her sing a few other songs, I'm pretty sure it is. I love this.

Zora's films
Posted by seana graham at 10:55 PM No comments:

To Kill a Mockingbird, community style 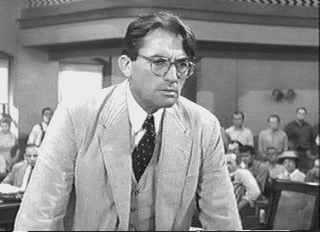 These days, it takes a bit to drag me back to Bookshop Santa Cruz on my day off (it's kind of  a busman's holiday for me), but the fiftieth anniversary of Harper Lee's To Kill a Mockingbird tilted the balance. We have a monthly community book group facilitated by Julie Minnis, and though these groups have grown in size and popularity since inception, last night's draw of over 150 people was definitely a record.  Judge Ariadne Symons and public defender Larry Biggams graciously agreed to not only come and be part of the discussion but to read from the closing arguments of the trial scene. Symons said that she'd realized in the course of a reread that there was actually no place for her as a lawyer and a woman judge in the book. I suppose she could have played Scout, but she elected to come in the persona of Gregory Peck playing Atticus Finch. She encouraged Biggam to do the same, but he advised her that he 'didn't do rumpled'. If you study the picture here, I think you'll agree. 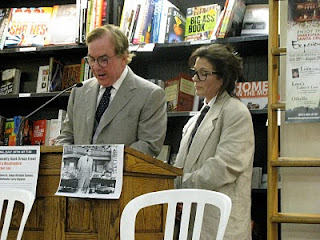 It's very easy these days when you work in a bricks and mortar bookstore to lament the decline of the book and of bookstores as public spaces. So it was heartening to see a huge crowd turn out to talk about this novel, to hear heartfelt and intelligent comments, to see the public interact with their legal representatives in a way that must be rare enough for all parties. Such events, which celebrate the life of literature in a profound but not at all pretentious way, are the real reason to keep storefronts alive. At one point, Mr. Biggam said that in facing a recent confrontation with his teenager, he paused at the threshold and thought "What would Atticus do?"

The internet can do a lot of things well in terms of connecting people, but I still haven't heard 150 people laugh at the same moment on it. 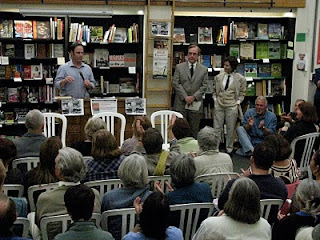 It is, however, a pretty good place to say: Thank you, Harper Lee.
Posted by seana graham at 11:13 PM 2 comments:

To Kill a Mockingbird, by Harper Lee 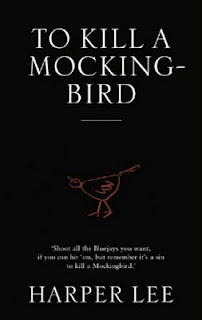 I thought it might be fun to do a kind of running blog commentary on To Kill a Mockingbird, as we have come to the fiftieth anniversary of its publication. Theoretically, I am rereading this for  a big community book group we're going to have in about a week and a half, and I thought there would probably be plenty of grist for the mill here. For instance, I was surprised at the way the book starts, which I'll get to at the end of this post, just to give you time to test yourself on what you think it was.

I was still a child myself when I read TKaM, which probably explains why many of my impressions seem so sharp, when much that I've read since then seems vague. Of course, I saw the movie too, a few years later. It remains one of the few movies I can think of in which there seems no gap between the original text and the movie. The characters were exactly as I imagined them, or at least didn't violate any conception I had had of them. Scout, Jem, Dill, Atticus and even Boo Radley were just as I had read them. Even the light seemed right.

Here are a few things I've found odd in the intervening years:

For the longest time, and in fact till the recent movie, Capote, I had the idea that Harper Lee had written this book and then more or less vanished from the face of the earth. I was shocked to learn that she was not a recluse shut up in some southern mansion, but had had a more or less constant presence in the New York literary scene. I was equally shocked to realize that Dill grew up to become Truman Capote. I'm still shocked when I think about that. When you read fiction, you don't really expect that the model of the childhood next door neighbor will grow up to become one of the era's leading literary lights. What are the odds? I remember hearing some rumor that Capote actually wrote TKaM, and though I haven't heard much about that since, in some ways it seems a great deal more plausible than the reality of two writers this quality growing up next door to each other.

When I read To Kill a Mockingbird in fifth or sixth grade, even though I read it on my own,  I remember feeling as though I was reading a 'classic'. It already had a kind of canonical status, although of course at that time I wouldn't have known what a canon was if it shot me. It is surprising to me that it had probably only been out for ten years or so. Ten years later is usually a very wavering period in a novel's life. Most bestsellers have died off by then and most classics have not yet been born--or I suppose I should say, reborn. But TKaM seems to have just chugged merrily along. Needless to say, these are just my impressions, not well-researched facts.

I still wonder why Lee didn't try her hand at another. Perhaps during this anniverary, I'll find that out.

Okay--how does To Kill a Mockingbird begin? I had always remembered it as beginning with the arrival of Dill into the lives of Scout and Jem. And that's almost right. But before that happens we are treated to the ancestry of the Finches and how they came to be in the place they are. And before that happens, we have the opening line:

"When he was nearly thirteen my brother Jem got his arm badly broken at the elbow."

The story is then ostensibly about how Jem came to break his elbow. Less ostensibly, it is also about how the lineage of the Finches, which has partaken in the primal sin of slavery in the past, comes to fulfill its destiny in the present.

Wonder how it's all going to work out?


*I'm editing this to add a link to Kathleen Kirk's current post, since, as seems to be often the case, we are once again on the same page.
Posted by seana graham at 7:00 PM 2 comments: