The Raven's Torch--Aurora Borealis: Myths and Legends, by Clifton Tilley 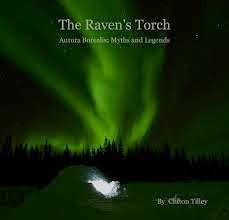 Just a quick note to say that one of my far flung cousins has put out a little photography book on the Aurora Borealis. It's small but it has some stunning photographs, and in the brief texts which share its pages, he tells some of the different legends that these northern lights have inspired. If you were alone in the dark on a northern night and one of these light shows popped up, you would need a story, believe me...

You can find a copy HERE if I've piqued your interest.
Posted by seana graham at 2:32 PM No comments:

The Animal Family by Randall Jarrell at Escape Into Life 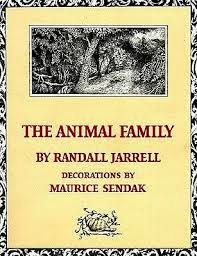 Just a quick note to say that my latest review is up at Escape Into Life. I finally get around to reading the short children's book The Animal Family this time. I came to Jarrell through his essays rather than his poems and read his novel Pictures From an Institution, one of those academia satires that professors seem to be awfully fond of writing a long time ago. I never read any of his later children's books till now, though. The Animal Family is a children's story in something of the same way that Russell Hoban's The Mouse and His Child is a children's story, though not as somber. Although I see on Good Reads that many people remember it fondly from childhood, I do wonder exactly what sort of children Jarrell was thinking of when he wrote it.
Posted by seana graham at 11:31 AM 2 comments: 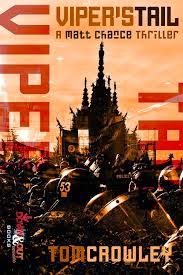 One of the unexpected pleasures of attending Bouchercon in Long Beach this fall was that I met a surprising number of authors heretofore unknown to me. Tom Crowley was one of these writers, and actually the first person I  met after stepping through the conference doors. As we sat at a small table orienting ourselves for the days to come, I learned a bit about his life. A Vietnam vet, he then spent many years in the Foreign Service, and ultimately left that world to work for General Electric in Asia. He ended up in Bangkok, where he volunteered in helping street children there. And he's also a pool player, which ended up being the subject of his first non-fiction book, Bangkok Pool Blues. More recently he's decided to try his hand at novel writing.

After going to his author profile session I was even more intrigued to read his Matt Chance books, and luckily for me, I happened to end up at the table of his publisher Down and Out Books, where he very generously gave me signed copies of his work. I have just finished reading the first one.

Matt Chance is a third generation soldier, his grandfather fighting in World War II and his father in Vietnam. Matt has served as a U.S. Army Ranger in Iraq and Afghanistan but has grown disillusioned with the cynical deployment of young men and women and, after being wounded in the war, is ready to resign when a kindly medical examiner has him medically discharged. He decides to return to Thailand where he was born to a Thai mother, though he has spent much of his adulthood in America, home of his deceased father. Only back in Thailand for two years, he is still trying to figure it out and to find his place in it when a mysterious visitor approaches him in a pool hall he frequents. He turns out to be an American investigating the death of another American who had worked with him at the Center for Disease Control. He is supposed to have been trampled to death by elephants, but this man isn't buying it.

Matt's only looking for a quiet life, getting to know his girlfriend Noi better, and acting as a governmental advisor on environmental matters in the country's forests and parks. Unfortunately for him, that turns out to be a great cover for him to go up and look further into what happened to the dead American. And his Ranger background is pretty useful too. Try as he might to extricate himself from the adventure he's been  set on, there are powers at work that are greater than his own power to resist. And, as he finally reluctantly admits, the only way out is to go all in.

One of the things I like best about this book is that Crowley is willing to stop the plot for some contextual explanation. We learn a lot about Asia and the various power struggles going on there from a perspective that is not purely defined around American self-interest. Even more interesting to me, though, was the perspective we get on Matt as a combat veteran. As we get further into the story, Matt is being drawn back into a way of being that he doesn't want to identify himself with anymore, warrior mode, if you will, and we start to get the author's insights into how combat changes a person. As I read the first of these sections that take us somewhat out of the direct action, I found myself thinking that this is one of the great things about books. You could never just stop and talk about what it's like to be a soldier in the middle of an action movie.

And though of course this is in the end written for entertainment, at the end of the book you will find some clarifying notes, a historical context that gives weight to the fictional situation.

A very interesting novel on many levels, and even if you aren't primarily a thriller reader, I do recommend it. 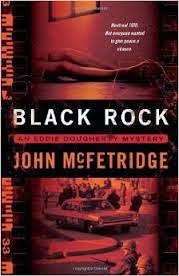 My review of Black Rock: An Eddie Dougherty Mystery by Canadian author John McFetridge went up at Escape Into Life this morning. It's a terrific book, I think. While McFetridge's Toronto books are often justly compared with Elmore Leonard's, I think the comparison I've seen for Black Rock with the Dennis Lehane of Mystic River is quite apt.

I thought I'd add here for any regular readers of this blog that there were some interesting parallels with Adrian McKinty's Sean Duffy books. In both cases, there's a young cop who by circumstance is neither fish nor fowl in the community he is policing. Both are historical and by "historical", I mean set in a place and period that the author knew intimately as a child. Both McFetridge and McKinty have earned their chops with their excellent previous novels, but in both cases I thought that using this territory allowed (or forced) them to deepen their stories a little. I would say in both cases that the stakes seem slightly higher.


Oh, yeah--in both series, there are also plenty of bombs...

Posted by seana graham at 4:23 PM No comments: