J is For Judgment--or one good reason to read mystery novels. 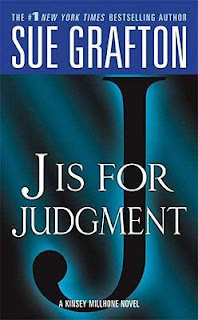 This blog has lagged a bit of late. The main reason is that with multiple projects going, I don't seem to be getting done with any of them. For example, I'm a fair way into this tenth outing of Sue Grafton's Kinsey Milhone series but that's not the same as done. Luckily for me, with mysteries, you shouldn't give too much away anyway. So, though I have at least gotten a bit further than this, here is a little quotation from pages 8 and 9 in the mass market edition:

"Wendell Jaffe and his partner, Carl Eckert, put together limited partnerships for real estate deals to develop raw land, build condominiums, office buildings, shopping centers, that kind of thing. They were promising investors a fifteen percent return, plus a return of their original investment within four years before the two partners would take a profit. Of course, they got in way over their heads, taking off big fees, paying huge 'overhead' expenses, rewarding themselves handsomely.

Alarm bells, anyone? No? Very well then, I'll continue:

When profits failed to materialize, they ended up paying old investors with the new investor's money, shifting cash from one shell company to the next, constantly soliciting new money to keep the game afloat."

"In other words, a Ponzi scheme," I inserted.

"Right. I think they started with good intentions, but that's how it ended up..."

And yes, this absolutely reeks of the whole Madoff scandal. There's just one slight problem. This was first published in 1993.

Sometimes people put down reading mysteries and crime fiction as a waste of time. But if a few more people had read these lines back in the nineties, they might have a bit more retirement money in the bank than they do now. Sadly.
Posted by seana graham at 9:27 PM 2 comments: