The Heart is a Lonely Hunter, by Carson McCullers

I just put up a new review at Escape Into Life of this book. Since I wanted to put up a cover there that was designed for the publisher's website where you could actually buy the book, I didn't put up the cover of the little paperback I actually read, so that's what you're going to see here.


I also put in a couple of links to things about McCullers there, and I was particularly interested to find and watch a short video of McCullers. A rather odd little clip, apparently aboard a ship, and I think it's the only interview where the interviewer actually appears to be embracing his interviewee...

It's a good book. Maybe it's time you read or reread it.
Posted by seana graham at 3:24 PM No comments:

In the Morning I'll Be Gone, by Adrian McKinty 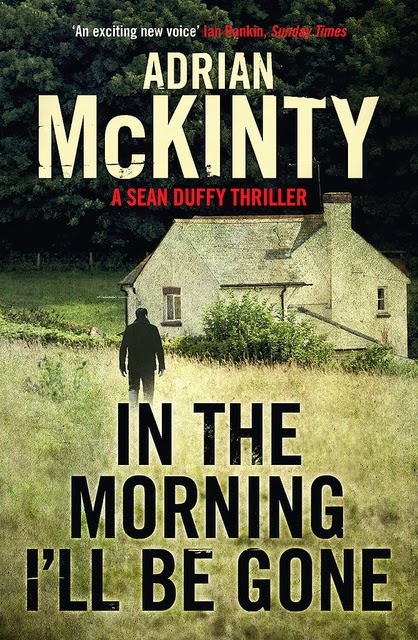 Yes, but will he? And what will be the manner of his going? That's the question hovering over this third entry in the Sean Duffy "Troubles Trilogy". It's not like he has much going for him as the book opens, and there's yet another trap door lying in wait for him before we're too many pages in. Somehow the Catholic Duffy has not managed to make too many friends in the Protestant police force of Northern Ireland. Although the ladies seem like him.


Whatever may happen to Duffy in the course of this book, and I'm not telling, there's a general atmosphere of exile and leavetaking permeating it. It begins at the tail end of 1983, and there's a sense that anyone with any possibility of doing so is getting out. There's America, of course, but why not just take the little hop to Scotland or England? Sean's old girlfriend has, and one of his fellow officers is hoping to. And even in the course of his investigations, Duffy will go back and forth a few times. So why shouldn't he make the move more permanent?


Luckily for Duffy, the powers that be scoop him up again to put him to use. Luckily, I say, because it becomes clear in the course of this book that Duffy, unoccupied, is at pretty loose ends. So it's a good thing his old school chum Dermot McCann has escaped from the Maze Prison and has cooked up some dastardly plan that somehow Duffy is supposed to stop. In his wanderings, Duffy introduces us to several circles of Northern Irish hell that have somehow escaped us previously, and has the chance to solve a locked room mystery which I hovered near the solution to but never quite reached, or reached just about when I was supposed to.


A pleasure in all of McKinty's books is the quality of the writing, and I was struck in reading this one at what a wide frame of reference he has to draw from. There aren't many mysteries where you'll get a joke featuring Dia de los Muertos, a quote from Ezra Pound, a nod to Mahler in one corner and The Velvet Underground in another. And if you don't get half of the allusions it will be all right (trust me), because the story isn't dependent on your understanding them. These are just the added features. Call them a bonus.

Posted by seana graham at 11:36 AM No comments:

Buried for Pleasure, by Edmund Crispin

I came back to Edmund Crispin after a long absence, mainly by happenstance. I had a copy of Buried for Pleasure floating around the house, and as for some reason I'm very drawn to reading old, neglected mass market paperbacks these days (mainly because to a large extent, the format seems to be doomed) I picked this up. Although strictly speaking this isn't a Golden Age mystery, being published a few years after the Second World War, to all intents and purposes it may as well be.


Gervase Fen, Oxford don and professor of literature, has decided to run for parliament, for reasons that are never quite clear. Boredom with the academic lot and a desire for a new role are cited, though it's patently clear that what Fen wants is a vacation, preferably with a little crimesolving thrown in. And this is exactly what he gets.


I'll say up front that this is the kind of book which you either find tedious or find delightful (as I do), almost regardless of the mystery, although I think Crispin does an honorable job on this aspect. Where he really excels is at creating the three ring circus that is Sanford Angelorum, the small English village from which he runs his campaign. I see reviewers make useful comparisons to Michael Innes and John Dickson Carr, but really the writer Crispin puts me more in mind of is Margery Allingham. The prose is sparkling, Crispin's erudition evident (in real life, he was the Oxford educated composer Robert Bruce Montgomery), and it takes pleasure in the eccentricities of life. Sanford Angelorum, odd though it is, seems a place that will continue on after Fen's and our departure.


I will take issue with one small detail of the book, though. The non-doing pig has a good deal more charm than Gervase Fen credits...
Posted by seana graham at 3:55 PM 2 comments:

A Long Way From Verona, by Jane Gardam 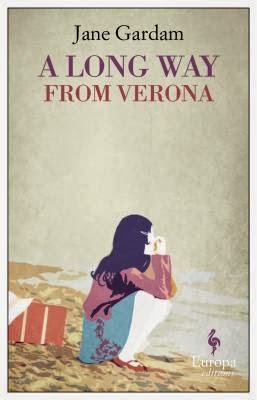 My first entry for the Europa Challenge Blog, 2014! Last year I was overly ambitious and bombed spectacularly at getting many Europa titles read, this year I am going for "underly" ambitious, which may work better.


Although I had the Europa Challenge blog in mind as an incentive, I actually didn't come across this title through the usual Europa channels. I was listening to an NPR show that featured Nancy Pearl of Book Lust fame, because I'd been alerted to the fact that one of my favorite authors had been chosen off her bookshelf for her Picks from the Past feature. That book was The Cold Cold Ground, by Adrian McKinty, but I then stayed tune to hear what else she might have selected. A Long Way From Verona was the next selection.


I've heard Jane Gardam praised in many quarters, and in fact she seems to be a Europa favorite, as many of her titles are in print here in the U.S. in their editions, but for some reason, I'd been a bit scared off by her. I think I had the impression that these books would be odd in a British sort of way that I can find off-putting. Don't ask me why. At any rate, Nancy Pearl's mini review of this book didn't sound like that, so I thought, why not give it a go?


Although I didn't learn this till after reading it, A Long Way From Verona seems to have been marketed in England, where it first came out in 1971, (reissued in the U.S. by Europa in 2013) as a middle school or young adult novel. The protagonist and narrator is thirteen as she recounts her tale, and twelve  when the story opens. That said, it didn't really occur to me that it wasn't conceived as an adult novel--there is definitely no "writing down" about it.


Jessica Vye tells us that she is not quite normal, partly due to a traumatic experience she had when she was nine. This incident bestows upon her the mantle of "writer" at an early age, which she seems to find rather appalling. She doesn't seem to find the fact that she is living her young adulthood in the greater trauma of World War Two traumatic at all in comparison, though the area she lives in on the English coast is subject to bombing raids and children carry their gas masks along with them as a matter of course. (It strikes me now that there are some similarities between Nancy Pearl's first pick, The Cold Cold Ground and this book, as the former tells of being a policeman in Belfast during the peak of the Troubles, when the police checked under their cars for bombs every morning in a similar routine way.)


A Long Way From Verona could well be titled "Portrait of the Artist as a Young Girl". Jessica's family are newcomers to Cleveland Sands, as her father has rather belatedly decided to become a minister, and her mother is adapting to this role the best she can, which from Jessica's viewpoint is not very well. As Jessica herself says, she is not very popular, but she does at least have a few stalwart friends, though many of her adventures seem to take her off by herself. Although this is in many ways a funny book, there is a very clear portrait of the way a writer may be slightly at odds with the world as it is at all times, and even from a young age. No one does really quite understand her, although she is lucky in finding one Miss Philemon early on, who proves an ally. There is a very precise understanding in the book of how experience works itself through a young person inarticulately, and comes out somewhere unexpected, baffling not just the people around them, but even that person herself.


I look forward to reading more Jane Gardam and seeing how her "adult" novels compare.