Shot in Detroit by Patricia Abbott 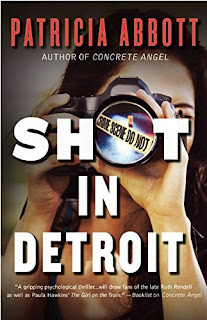 I like to read mystery series. There is a certain pleasure in familiarity, in knowing what you're getting. But there is at least an equal pleasure in reading a novel that does not follow at all from the one proceeding it, and in fact, couldn't even be postulated from it. Such is the case with Shot in Detroit.

Concrete Angel, which I reviewed here last year, was a tale of psychological suspense in the "Mommy Dearest" vein, not so much a crime novel per se, since the crime happens in the opening pages, but an unveiling of all that comes before and after. A mother/daughter story, it bears some relation to Abbott's own crime writing daughter Megan Abbott's novel The End of Everything, focusing as it does on the darker side of family and close community.

Shot in Detroit is not a family drama, at least on the surface. Although Violet Hart's mother Bunny, a career waitress, appears in the story, she does so more as a cautionary tale, and in some ways only underscores how alone and adrift Violet really is. Violet is a professional photographer approaching forty, and Violet's panic about her career's trajectory is somewhat akin to a woman experiencing the promptings of her biological clock. There's a kind of "now or never" quality to her desperation.

The opening pages of Shot in Detroit find Violet heading out before dawn to Belle Isle, an island park in the middle of the Detroit River, hoping to find subject matter for a first rate photograph. By this, she doesn't mean the charmingly picturesque. Belle Isle is a misnomer for "a huge park in a spectacular state of decay." This is Detroit, circa 2011, a city that's hit bottom but doesn't know it yet, and hasn't imagined even the tentative hopeful resurgence it's experiencing now.

Violet wants to make art. Though she carries a press pass, she parts ways from the school of photojournalism--her aim is aesthetic, not news or story driven. She perhaps has more in common with an odd young guy who spends most of his time out on Belle Isle making his own obscure outsider art from found objects. Let's just say that there isn't a line Derek Olsen won't cross in pursuit of his vision, and as the novel progresses, this becomes increasingly true of Violet as well.

Violet's career hopes surge again because her occasional lover Bill, a black mortician known for his flair in dressing a body, calls on her to help with an emergency: he needs her to take a photograph of a corpse. Despite the macabre nature of this request, Violet finds inspiration here and requests to be notified whenever there is a young black man who has been brought to the mortuary.

We are introduced to them and the reasons they have ended up there through some of the chapter headings. Although I would have predicted that there would be a lot of gang violence, these deaths are not so stereotypical. Some of the men have fallen victim to the kinds of accidents that any mortal might be subject to. But others fall prey to the violence and other dangers of living in a poverty-stricken city. Violet hopes to be able to capture enough of their portraits to put together a meaningful show.

Violet may be obsessed with her artistic vision, but she constantly questions her own motives. Some of the answers she needs might be found in the epigraphs from famous photographers that head up other chapters. In fact, these artists are actually the family, the tribe that Violet finds so lacking in  her own life.

It is always a mistake to deduce what an author might be like from their fiction, and I think this probably goes doubly for crime fiction. Though I don't know Patti Abbott personally, I do have some sense of her persona from her popular blog, and there doesn't seem to be much evidence of a Violet in her kind and gracious personality there. But that's the great thing about crime fiction. For both writer and reader, there's a chance to experience unclaimed aspects of our beings.

Check out Patricia Abbott's interview at Dana King's One Bite at a Time if you'd like to know more about the background of this fast-paced and thought-provoking novel.
Posted by seana graham at 5:51 PM